Susan Collins, Not Pelosi, Is the True Profile in Courage 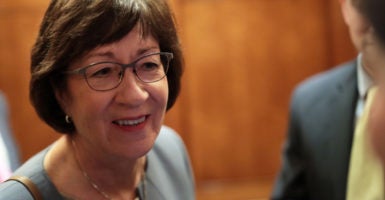 The John F. Kennedy Library Foundation is set to present its 2019 Profile in Courage Award on May 19 to … drumroll … House Speaker Nancy Pelosi.

It’s not clear what the California Democrat did to deserve the annual award, which claims to recognize public officials whose actions “demonstrate the qualities of politically courageous leadership” and fetes politicians and others “who [risk] their careers by embracing unpopular positions for the greater good.”

It might qualify as “politically courageous” if Pelosi took conservative stances in her ultraliberal San Francisco district, and it’s unclear how she has risked her career as the leader of a far-left House Democratic caucus that largely agrees with her.

The selection of Pelosi for the award is all the more perplexing because there was a more obvious—and far more deserving—candidate for this year’s Profile in Courage honor.

Sen. Susan Collins, R-Maine, was subjected to threats of sexual assault and even death ahead of the Senate’s vote in early October on the nomination of federal Judge Brett Kavanaugh to the Supreme Court.

Collins recounted how a staffer answering a phone call in her Washington office was told by the caller that “if I voted ‘yes’ for Justice Kavanaugh that he hoped she would be raped and impregnated.”

The four-term senator—a centrist targeted by Kavanaugh’s liberal opponents as a possible “no” vote—likewise recalled being confronted outside her Washington home by a man who shone a flashlight in her face and began videotaping the confrontation.

On another occasion, Collins reported receiving in the mail at her Washington office a “3-foot-long cardboard cutout of male genitalia.”

Despite the extreme harassment, on Oct. 5, Collins provided a crucial vote to advance the Kavanaugh nomination on a 51-49 vote and to confirm him the following day on a 50-48 tally.

“The easier vote politically clearly would have been for me to vote ‘no,’” Collins told MacCallum. “But that would not have been the right vote … . I really won’t ever be intimidated. I have to do what I think is right, and I’ll let the chips fall where they may.”

Collins said she ultimately voted for Kavanaugh because the accusations leveled against him of sexual assault dating back to his high school days were entirely uncorroborated. She said that to have done otherwise would have been to “throw overboard the presumption of innocence” and to “dispense with fairness, the rule of law, and due process.”

As a postscript to the story, the day after the JFK Library Foundation’s April 7 announcement of Pelosi’s selection for its award, a Burlington, Maine, woman appeared in federal court to face charges of mailing a threatening letter to Collins over her vote.

The Associated Press reported that an affidavit filed in U.S. District Court says that Suzanne Muscara, 37, sent starch to Collins’ Bangor home, along with a letter reading “anthrax!!! HA HA HA!!!” Muscara accused Collins of having “betrayed the people of Maine.” She pleaded not guilty on April 25 to one count of mailing threatening communications, according to the Bangor Daily News.

So, what is there in Pelosi’s long career in Congress—32 years, as of June 2—that comes even remotely close to being subjected to that kind of extreme abuse?

What actions did Pelosi take that the Profile in Courage Award Committee decided was more deserving of the honor than standing up to the vicious hatred and threats of physical violence from the unhinged left that Collins faced?

Pelosi, the committee explained, “will be recognized for putting the national interest above her party’s interest to expand access to health care.”

That’s a curious choice, not least because the award is effectively for something that occurred nearly a decade ago, during Pelosi’s first stint as speaker—the 2010 passage of Obamacare and the resulting backlash by voters in that year’s midterm elections that swept Pelosi and her party out of control of the House.

Perhaps recognizing the absurdity of feting Pelosi for forcing the castor oil of Obamacare down the throats of the American people—and nine years after the fact, to boot—the committee added a second (and equally specious) reason.

Caroline Kennedy and her son, Jack Schlossberg, declared that Pelosi was also chosen for “leading the effort to retake the majority and elect the most diverse Congress in our nation’s history” and for doing so “against a wave of political attacks.”

What Kennedy’s daughter and grandson were in effect saying is that waging the standard congressional campaign—something that occurs every two years—now somehow qualifies as a meritorious “profile in courage.”

The dubious selection of Pelosi—“the most important woman in American political history,” according to Kennedy—as this year’s recipient of the JFK Library Foundation’s Profile in Courage Award shouldn’t really come as a surprise, though.

That’s because the award, named after the late president’s 1957 book of the same name, has a long history of being given mostly to Democrats and liberals, and for supporting liberal causes, dating back to its inception nearly 30 years ago in 1990.

The 2018 award, for example, went to then-New Orleans Mayor Mitch Landrieu, a Democrat, for taking down four Confederate statues. In 2017, it went to former President Barack Obama for his presidency as a whole. In 2016, the recipient was then-Gov. Dannel Malloy, D-Conn., for his willingness to resettle Syrian refugees in his state.

On those rare occasions that the award has gone to a Republican, it was for surrendering on conservative principles, such as former Rep. Bob Inglis, R-S.C., for flip-flopping to the liberal position on the issue of climate change and supporting a carbon tax (2015); President George H.W. Bush for reneging on his pledge not to raise taxes (2014); and Sen. John McCain for championing his signature campaign-finance reform bill (1999).

The 2019 award will be presented to Pelosi at a ceremony May 19 at the John F. Kennedy Presidential Library and Museum in Boston.

In the final analysis, it’s the JFK Library Foundation’s award, and it can bestow the award upon whomever it wants—but in light of the snub of Collins and in the interest of truth in advertising, the award should be renamed the Profile in Liberal Courage Award.