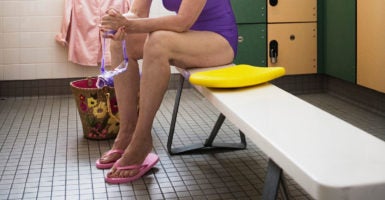 As a woman and a mom, I naturally was concerned that my children or I could be in the presence of a man while using the women’s locker room at the local recreation center. (Photo: Jupiterimages/Getty Images) 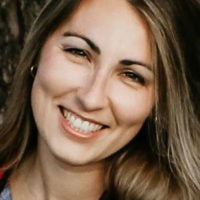 Natassia Grover, a Virginia resident, is a co-founder of Parent and Child Loudoun and a member of Hands Across the Aisle. The mother of three children, she is a registered nurse who currently works part time as a secretary for a construction firm.

It came to my attention last spring that a man who identifies as a woman was using the women’s facilities for my local indoor swimming pool.

As a woman and a mom, I naturally was concerned that my children or I could be in the presence of a man while using the women’s locker room at the Claude Moore Recreation and Community Center in Sterling, Virginia.

So I reached out to the pool director and division manager of this Loudoun County government building to ask what their policies were regarding locker room access.

That was just the beginning.

After months of asking various authorities, I have been unable to find a single straight answer about our neighborhood pool’s policy.

Then a few days ago, an official police report surfaced: A naked man walking around the women’s locker room was seen peeping at a girl inside one of the shower stalls. When recreation center staff approached the man, he fled, and investigators are still looking for him.

I have no idea how this person identifies. I have no idea why no one asked questions when this man entered the women’s facilities in the first place. Most importantly, I have no idea what would have happened if this criminal had claimed to be a woman when confronted by staff.

While I write about this, Congress is about to vote on the Equality Act, which would make this policy the law of the land across all 50 states.

As we move into the summer months, I already do not feel safe taking my children to my Loudoun County pool—not just because the peeping Tom is still at large, but because of what I discovered about our local community center.

If I cannot be confident that my children and I will be safe in a female-only space, where else are we supposed to go?

When I approached the director and division manager at the pool, I was told that as of 2010, the facility granted access to private facilities on the basis of self-identified gender.

I was told that if a woman complains about a man in the locker room, and the man identifies as a transgender woman, then staff would have a conversation with that person. It was unclear what would happen after that.

When I expressed my dismay about this ambiguous policy, the director asked me point-blank: “How much privacy do you need?”

I could only blink at him. I was speechless.

As I paused, he told me there are “partitioned areas” and each shower is curtained off individually.

That made my blood boil. So I told him:

“Have you ever been in a woman’s locker room? No? Well, let me tell you how it works.

“Little kids are annoying—they will come under the stall doors of the toilets and open the doors while you are using them. They will pull open the shower curtains while you’re in there.

“And trying to get dressed in a slippery shower or a bathroom stall—where there are not adequate shelves to keep your stuff from falling onto the floor or into the toilet—is impractical. So my family and I put our stuff on a bench in the open area where it’s much drier with more room to move.

“I don’t like to undress in front of everyone, so I will wrap myself in a towel and try to get dressed that way. But I know that if the towel does slip, it’s not a big deal, because it’s only other women and small children in there. Never mind that the shower curtains and stall partitions often allow for glimpses of the people behind them anyway.

“But now you are telling me that my children or I could have to share this sensitive space with a man?”

The director and division manager said they would take my concerns to their boss. I never heard back.

When I sent a follow-up email, I was told that staff were busy and would respond soon. I have not heard anything since.

So I took matters into my own hands. That summer, I stood before the Loudoun County School Board and shared my concerns about gender identity policies. Then I emailed the county government to ask for clarification about the policy, but received no answer.

I hope that authorities find the man who victimized that poor girl at our local pool. Regardless of whether he identifies as a man or a woman, my search to find answers about what to do in situations like these has taught me something.

Under a gender identity policy like the one at our pool, I no longer can trust that authorities in my hometown will prioritize my needs and those of my children when we are in supposed safe spaces for women.

Before this policy took effect, I could not imagine bring asked by an authority figure how much privacy I needed from men’s bodies and men’s glances, and then lectured on how much privacy ought to be sufficient.

The way this gender identity policy has changed my hometown is subtle, but comes with real consequences.

Now Congress is considering the Equality Act, a dangerous bill that would make this policy the law of the land across all 50 states.

If the legislation passes, women across the country will find themselves in the same situation as my family and me—unable to trust that the responsible authorities will fight for our privacy and safety.

Don’t be fooled by the rhetoric. This is not equality; this is unfair to women.

Don’t be afraid to speak out.