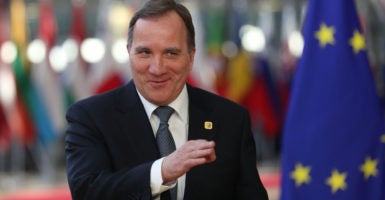 According to a recent survey, a majority of Americans say socialism is incompatible with American values, with only 10% of voters in a new poll expressing a positive view of socialism.

That’s welcome news, but it’s rather troubling to see even 10% of those polled with a positive notion of socialism. Regrettably, socialism is trending in America, in part thanks to politicians who once ran from the term, but are now embracing it for short-term political gains.

Making a strong case that “America will never be a socialist country—ever,” President Donald Trump offered an effective rebuke to the trending socialist ideas.

As a matter of fact, history unmistakably shows that “power for the ruling class” in any of its forms has never really worked anywhere. Everywhere it has been tried, socialism has done harm.

It’s a cautionary tale that should be taught to every new generation. Socialism is a failed economic arrangement. In many cases, socialists have ended up being forced to adopt capitalist measures for their survival.

In the late 1970s, Deng Xiaoping abandoned the rigid excesses of Maoist socialist thought and adopted a form of communism with “Chinese characteristics” that was more capitalist than socialist in several ways.

Deng, however, still ensured the Communist Party’s control of any new homeland enterprise or foreign investment, much to China’s detriment over the years.

It’s also notable that many on the left claim that Sweden is proof that socialism works, trying to paint the country as a good “socialist” country—in contrast to bad socialist nations, such as  Cuba and Venezuela.

However, the fact is that Sweden has always had a vibrant private sector. It might be accurate to say that Sweden has overcome its socialist impulses. In recent years, Sweden has been privatizing socialized sectors, such as education and health care; cutting tax rates; and making welfare less generous.

Even though tax rates and government spending remain comparatively high, open-market policies generate the revenue to support the spending. The proof of the Nordic country’s commitment to an open-market economy includes the fact that Sweden ranked No. 19 worldwide in The Heritage Foundation’s 2019 Index of Economic Freedom.

As Heritage’s index has documented over the past 25 years, free-market capitalism has done more to lift the world out of poverty than any other economic system ever devised.

People today enjoy longer lives, significantly better health, and a level of living standards that would have been unimaginable just a few generations ago.

Those blessings have not arisen from the beneficence of some good king or a benign technocracy of experts under socialism, but rather from the efforts of an ever-growing number of individuals who have enjoyed the fundamental freedom to decide for themselves how to live their lives.

The real magic of the market is that countless individuals, empowered by exercising the freedom to pursue their own goals and ambitions, have made possible previously inconceivable heights of economic development that benefit us all.

Our free-market capitalism does not, of course, guarantee happiness and success, but it does enable the quest for them. It is this freedom to pursue a self-determined, better life that brings real meaning to the lives of individuals and collective benefits to our society.

Indeed, as Kay Coles James, president of The Heritage Foundation, noted in her recent commentary, “We who cherish freedom must take on the false prophets of socialism and spread the truth that limited government, free markets, and a nation based on the rule of law are the surest ways to ensure freedom, prosperity, and opportunity for all.”

Those are words of wisdom for those who will listen. The allure of socialism is a mirage that each new generation will be tempted to run toward—unless they are told the truth about socialism’s legacy of failure.