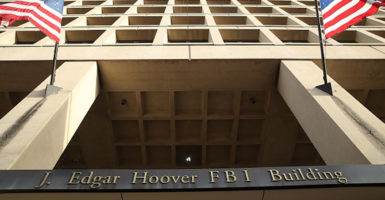 A prosecutor tapped by the attorney general is looking into possible misconduct by FBI officials who initiated spying on the Trump campaign. Pictured: The J. Edgar Hoover FBI Building in Washington, as seen Jan. 28. (Photo: Mark Wilson/Getty Images)

The Justice Department confirmed to media outlets that Attorney General William Barr named Durham, now U.S. attorney for the District of Connecticut, to look into why and how department and FBI officials began investigating associates of President Donald Trump before the 2016 election.

Barr reportedly selected him to head the probe weeks ago, as the FBI came under intensified scrutiny for spying on one Trump campaign adviser and sending a confidential informant to talk to another.

In the aftermath of special counsel Robert Mueller’s report clearing the Trump campaign of conspiracy with Russia to influence the election, many Republican lawmakers called for an investigation into how the probe of Trump and his team commenced.

Two known incidents loom large: The FBI obtained a warrant under the Foreign Intelligence Surveillance Act to put Trump campaign aide Carter Page under surveillance. The FBI also sent a confidential informant to talk to George Papadopoulos, another Trump campaign aide, in a bar. The woman told Papadopoulos that her name was Azra Turk, and he later described her as “flirtatious.”

Here are six things to know about the prosecutor picked by Barr.

Durham, 68, began his career as a Connecticut state prosecutor working from 1978 to 1982 in the New Haven State’s Attorney’s Office.

A registered Republican, he next served in nonpolitical positions through 35 years in the U.S. District of Connecticut, based in New Haven.

From 1982 to 1989, Durham supervised the New Haven field office of the Boston Strike Force in the Justice Department’s Organized Crime and Racketeering Section. For the next five years, he was chief of the criminal division for the U.S. Attorney’s Office in New Haven.

Trump’s first attorney general, Jeff Sessions, appointed Durham as acting U.S. attorney for Connecticut in October 2017, and Trump nominated him for the post the next month. He took office in February 2018.

He examined whether two Boston mob figures, Bulger and Stephen “The Rifleman” Flemmi, had corrupted the FBI agents whom they served as informants.

As part of this investigation, Durham produced documents showing four men had been framed by FBI agents and convicted of murder in the 1960s. Two died in prison, but two others won a $100 million civil judgment against the Justice Department.

In 2008, then-Attorney General Michael Mukasey appointed Durham as a special prosecutor to conduct what turned into a three-year probe of the destruction of CIA interrogation tapes. He didn’t recommend any prosecutions.

In an overlapping probe, then-Attorney General Eric Holder named him as a special prosecutor to investigate alleged mistreatment of terror suspects by CIA interrogators and government contractors.

The second probe came after the Justice Department released a report noting possible past abuse by CIA interrogators. Durham concluded by closing most of the cases, but called for continued inquiries into the deaths of two prisoners.

Earlier this year, according to The Day newspaper in New London, Connecticut Deputy Chief State’s Attorney Leonard C. Boyle noted the only reason that Durham would make a public speech to a crowd at the University of St. Joseph, a Roman Catholic school in West Hartford, Connecticut.

“Other than an overwhelming commitment to the cause of justice, the two great devotions of John’s life are his Catholic faith and his family,” Boyle said of Durham.

Durham and his wife Susan have four sons and eight grandchildren. He reportedly is a big Boston Red Sox fan.

The New Republic, a liberal magazine, wrote of Durham in 2011 that he “earned a nonpartisan, camera-shy, ‘white knight’ reputation.”

Durham led some of the biggest public corruption cases in Connecticut.

Among them was the case of Connecticut Gov. John G. Rowland, a Republican who resigned in 2004 after federal prosecutors found he illegally took gifts from state contractors. Rowland pleaded guilty and was sentenced to a year in prison for offenses committed as governor.

Durham also led an investigation of Bridgeport Mayor Joe Ganim, a Democrat, who was convicted on racketeering and bribery charges in 2003. Ganim spent six years in prison.

Democrats recently excoriated Barr for even using the word “spy” to talk about actions by the Obama administration’s FBI and Justice Department against the Trump campaign before the presidential election in November 2016.

However, Democrats could have a difficult time in attacking Durham.

Confirmed as U.S. attorney in February 2018 by a voice vote in the Senate, he had gained praise from Democrats when Trump nominated him.

Among these admirers were two of Trump’s biggest critics, Connecticut’s two Democratic senators—Richard Blumenthal and Chris Murphy. The two men had recommended Durham to serve as U.S. attorney.

“John Durham has earned immense respect as a no-nonsense, fierce and fair prosecutor, and we are pleased that the White House has agreed with our recommendation that he serve as United States Attorney for the District of Connecticut,” a joint statement by Blumenthal and Murphy said. “As an Assistant United States Attorney, John Durham has proven himself time and time again in some of the most challenging and sensitive cases.”

It looks like Barr has found just such another case for Durham.