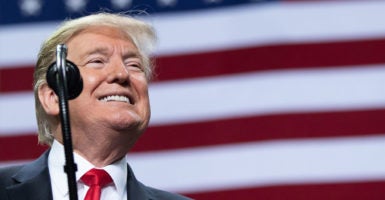 Many liberal economists predicted gloom and doom under President Donald Trump, but the unemployment rate is the lowest it’s been in almost 50 years. (Photo: Saul Loeb/AFP/Getty Images)

“We are very probably looking at a global recession, with no end in sight.”

That was New York Times columnist Paul Krugman, making a prediction on election night in 2016 about what we could expect under President Donald Trump.

Month after month, however, Krugman’s crystal ball has proven untrustworthy. But surely vindication would come sooner or later, right?

After all, Krugman’s not just any columnist. He’s a distinguished professor at the City University of New York Graduate Center. He won the 2008 Nobel Memorial Prize in Economic Sciences.

And he wasn’t alone in predicting gloom and doom under Trump. Many other liberal economists foresaw catastrophe on the horizon.

Fast forward to the latest monthly employment numbers, though, and you find reality simply refuses to play along with their hopes, er, prognosis.

Again, we got some stellar figures from the Bureau of Labor Statistics. In April, the economy created some 263,000 jobs, even better than the already impressive 213,000 jobs per month that has been created on average over the last year. We’re now up to 103 straight months of job creation.

Wages, meanwhile, continue to grow, especially for those on the lower end of the economic scale. “The recent wage gains have been largest for those who need it most,” writes tax expert Adam Michel. “For the last six months, wage growth for production and non-supervisory workers outpaced the average for the entire economy.”

The continued good news has left a number of economic watchers more than a bit confounded. “The labor market the United States is experiencing right now wasn’t supposed to be possible,” writes Neil Irwin in The New York Times.

If the conventional wisdom proved correct, for example, we’d be experiencing some serious inflation right now. Three years ago, the Federal Reserve was predicting 4.8% unemployment in 2019, with 2% inflation. Instead, of course, the jobless figure is a full 1.2 percentage points lower, and inflation is only 1.6% over the last year.

Some liberals insist that Trump doesn’t deserve the credit—that what we’re seeing is simply a continuation of good economic news that began before Trump took office.

True, the job market had been improving for a while before he became president. But, Irwin writes, “After more than two years of the Trump administration, warnings that trade wars and erratic management style would throw the economy off course have proved wrong so far, and tax cuts and deregulation are most likely part of the reason for the strong growth rates in 2018 and the beginning of 2019.”

Even as we savor the benefits of a strong economy (and enjoy how wrong the naysayers have once again proved themselves to be), this is no time to stand pat. Lawmakers need to keep tax rates and tariffs low. They can start by doing two things above all else.

One, make the 2017 tax cut permanent. The cut has been doing some good work, but key provisions are set to expire after 2025. The economy will do even better once employers and businesses know the cut won’t be going away.

Second, tame out-of-control spending. Politicians once took their responsibility to be sensible stewards of the national purse seriously, but profligacy has since become a way of life on both sides of the aisle. The tremendous amount of debt we’re accumulating will saddle future generations with higher taxes and less opportunity.

And if we don’t attack this problem when our economy is so strong, when will we? So let’s act—and shore up the tremendous gains we’ve seen so far.