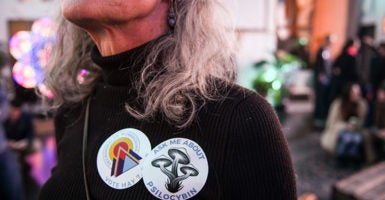 The decision by Denver voters last week to decriminalize psychedelic mushrooms marked a significant shift in the debate over legalizing illegal drugs—which up to this point revolved entirely around marijuana.

Denver becomes the first major American city to decriminalize another controlled substance, after 21 states, including Colorado, either decriminalized, legalized, or allowed small amounts of marijuana, according to the National Conference of State Legislatures.

Drug policy experts disagree on whether the results of the Denver referendum on psychedelic mushrooms mark a domino for more legalization efforts, however.

“The movement was never about marijuana; it was always about legalizing all drugs,” said Kevin Sabet, a senior adviser in the White House Office of National Drug Control Policy under Presidents Bill Clinton, George W. Bush, and Barack Obama. “I don’t want to put people in prison for pot, but I don’t want to commercialize marijuana.”

Psychedelic or psilocybin mushrooms, sometimes called “magic mushrooms,” are hallucinogens that can cause panic attacks and psychosis, according the the Drug Enforcement Administration. Other side effects include nausea and vomiting, muscle weakness, and lack of coordination, and an overdose may result in death.

Psilocybin, a naturally occurring psychedelic compound, is produced by more than 200 species of mushrooms.

Sabet, president of a group called Smart Approaches to Marijuana, is also director of the Drug Policy Institute at the University of Florida, where he is an assistant professor in the College of Medicine’s Department of Psychiatry.

“Big tobacco is already involved in marijuana. I’m not surprised to see efforts to decriminalized other drugs,” Sabet told The Daily Signal. “Mushrooms are the next easiest argument. It’s low-hanging fruit. They’re not going to call for legalizing crack cocaine now. But they are not going to stop with mushrooms in Denver.”

Denver’s Initiative 301 passed by a narrow 50.6% of the vote last Tuesday, after it initially appeared headed for defeat on election night. Advocates are pushing similar psilocybin-related measures for the statewide 2020 ballot in Oregon and California.

The Denver Elections Division is set to certify results Thursday after officials count military and overseas ballots. Unofficial results last week had 89,320 votes in favor of legalizing magic mushrooms and 87,341 against, according to The Denver Post.

As with most drug laws, restrictions on psychedelic mushrooms are at the federal level, Initiative 301 prohibits money from the city treasury to be used to impose penalties on mushroom users. It also creates a city ordinance directing police to make enforcement of laws against possession of psilocybin mushrooms the lowest priority.

“As research dissolves the taboo around it, more people are considering psilocybin as a tool for their own personal healing and wellness,” the website Decriminalize Denver says. “It stands to reason that decriminalizing psilocybin mushrooms will not only open up the door for more researching and more appropriate regulation. It will also lessen the potential risks that come from a mindset that’s fearful of criminal consequences, from uneducated usages, and from pushing use underground.”

The Denver vote is most likely an aberration, as most of the decriminalization effort remains focused on marijuana, said Jeffrey Miron, senior economics lecturer at Harvard University and director of economic studies at Cato Institute, who supports legalizing all drugs.

“I suspect this doesn’t lead to anything beyond Denver. The movement is about marijuana and, to some degree, opioids. Mushrooms are a one-off,” Miron told The Daily Signal.

“Personally, I think it would be a great thing if this was another domino and all drugs were legalized, full stop. But the pattern across the country and at the state level evolving is the scaling back or leveling off of enforcing laws against marijuana,” he said. “I’m not aware of a place that is seriously entertaining legalizing cocaine or heroin.”

Miron said that restricting a substance promotes an underground market. However, he noted that jurisdictions that legalize marijuana are imposing too many taxes and regulations.

“Legalizers need to be careful not to restrict marijuana through tax and regulation so much that they only recreate a black market,” Miron said.

The arguments in favor of magic mushrooms in the Denver referendum campaign largely were recycled from talking points supporting the earlier statewide ballot question on legalizing pot, said Jeff Hunt, director of the Centennial Institute, a conservative think tank at Colorado Christian University, who led the opposition to the mushroom initiative.

“The same arguments were used in this that were used for marijuana—that people were going to jail,” Hunt told The Daily Signal. “There were only about 50 arrests for mushrooms in three years.”

Research from the Colorado Department of Transportation shows a 151% increase in marijuana-related traffic fatalities, from 55 to 138, since the legalization of recreational marijuana. In the same period, 2013 through 2017, state traffic deaths as a whole rose by 35%.

This should be a reason for caution ain expanding legalization, Hunt said.

“When you have decriminalization, use increases, and so do public health concerns,” Hunt said. “This is Big Tobacco 2.0. Corporations will get involved, [they] will bury the side effects, and we will lose a generation of Americans to addiction, as we did with tobacco and opioids.”