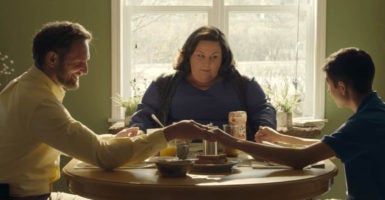 When it comes to Christian movies, I’m always a bit skeptical entering the theater. But this past weekend, I decided to see “Breakthrough” and found it well worth the price of admission.

Spoiler alert: Some minor spoilers ahead, but nothing you probably couldn’t deduce from watching the film’s trailer.

“Breakthrough,” released April 17, has grossed about $33.5 million so far. The movie is based on the true story of teen John Smith (played by Marcel Ruiz), who fell through the ice of a Missouri lake and spent 15 minutes under the frigid waters before first responders recovered his lifeless body.

After nearly an hour of cardiopulmonary resuscitation, multiple doses of adrenaline, and shocks from a defibrillator, doctors turn the hospital room over to John’s mom, Joyce Smith (Chrissy Metz, best known for her role on TV’s “This Is Us”). They tell her to take as long as she needs to say goodbye.

At this point, it’s hard to hold back tears as Joyce cries out to God to save her son, who she adopted from Guatemala. A moment later, John’s heart begins to beat again—but his future is still far from certain.

John spends the majority of the movie in a coma, and we are left to share the journey with his family, friends, and doctor as questions are raised about the possibility of his survival and the quality of life he would have if he ever wakes up from his coma.

Amid a swirl of questions and emotions, four messages stood out to me:

1. God is a big God. I don’t often walk out of a movie meditating on the authority and power of God. “Breakthrough” does not shy away from the truths of God’s sovereignty and his power to do the impossible.

My highest praise for “Breakthrough” is that it honors the Lord. As a believer, I was challenged in my own expectations of what God not only can do, but desires to do, in our lives—if we only take the step of faith to ask.

2. Life doesn’t always make sense. I commend “Breakthrough” for being bold enough to ask the question: “Why, God?”

I have found myself asking that same question on more than one occasion, and it’s rare that I hear an answer—at least not one that I am satisfied with.

Watching the true story of a miracle unfold on the big screen easily could lead viewers to ask: Why did I not get my miracle?  Why did my mother, brother, best friend, or pastor not receive the healing I begged God for?

“Breakthrough” does not attempt to answer that question. Instead, it gives a nod to the pain of not knowing the answer, acknowledging that it is OK to wrestle with the Lord as we seek to move forward in our lives.

3. Doubters are welcome. It’s a lot to take in: A boy who was dead for an hour is now alive. How do you process that?

“Breakthrough” takes the time to acknowledge the struggle of doubt within one’s faith, never condemning the doubters, but instead inviting them to ask the difficult questions of faith.

4. Community is critical. If you’re at all like me, you have probably thought about who you would call for support in the midst of a crisis, should such a situation arise. “Breakthrough” does a beautiful job revealing the powerful role that community plays in life’s hardest moments.

We see an entire town rally around the Smith family—imperfectly, but with the best of intentions. From cards to prayer vigils at the hospital to a viral Facebook page asking for prayers for John, the Smith family repeatedly is reminded that they are not alone in their fight.