As Democrats Threaten Barr, a Look Back at What Happened With Holder’s Contempt Charge 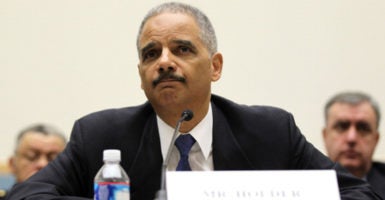 Attorney General Eric Holder testifies on Dec.. 8, 2011, before the House Judiciary Committee. The next year, the House voted to hold the attorney general in contempt of Congress for withholding documents related to the Fast and Furious scandal. (Photo: Alex Wong/Getty Images)

Some Democratic lawmakers threaten to handcuff and lock up Attorney General William Barr, but holding someone in contempt of Congress rarely is more than a censure vote.

The most relevant comparison: In a bipartisan vote, 17 House Democrats joined the Republican majority in 2012 to hold then-Attorney General Eric Holder in criminal contempt of Congress for not providing thousands of pages of documents regarding Operation Fast and Furious, a serious scandal for the Obama administration.

However, the Justice Department lost track of the guns. In late 2010, one was found at the scene of Border Patrol Agent Brian Terry’s murder.

The House at the time was under Republican control, and the criminal and civil contempt citations originated in the Oversight and Government Reform Committee, under Chairman Darrell Issa, R-Calif.

Barr responded that he has provided as much of the report as he is allowed to provide by law because it contains grand jury information and material that potentially could jeopardize an ongoing investigation.

“Here, [Barr] has given Congress complete access to the report except for some parts,” von Spakovsky, a senior legal fellow at The Heritage Foundation, told The Daily Signal. “Holder refused to provide information on Fast and Furious.”

“He was trying to cover up the most reckless Department of Justice ever, which led to the death of a Border Patrol agent,” von Spakovsky said of Holder. “The improper thing in the Barr case is that they want to hold him in contempt for following federal law.”

Von Spakovsky said he doubts a contempt citation for Barr would have the same bipartisan backing that the Holder citation drew.

The unredacted Mueller report already is available in a secure room for members of Congress to view, but not to remove or take notes or photographs.

The Daily Signal sought comment from Holder by phone and email at the law firm of Covington and Burling, where he is a partner, and the National Democratic Redistricting Commission, where he is chairman. Neither organization had responded as of publication time.

After the House voted to find Holder in contempt of Congress, Deputy Attorney General James Cole, Holder’s No. 2, issued a letter to the House stating: “The department will not bring the congressional contempt citation before a grand jury or take any other action to prosecute the Attorney General.”

Several Democrats indicate it would be different this time, and talk about putting Barr behind bars inside the Capitol.

“You have to have him sit for a hearing and you have to have him locked up until he agrees to participate and come to the hearing,” Rep. Steve Cohen, D-Tenn., told CNN’s Anderson Cooper. “It shows we want to hold him in contempt, but the fact is, he won’t be held in contempt because the Justice Department is not going to enforce a contempt citation against their boss.”

The move is a partisan attempt to discredit Barr, who intends to investigate whether the FBI acted properly in moving to surveil a Trump aide during the 2016 campaign, said J. Christian Adams, a former Justice Department lawyer and author of “Injustice: Exposing the Racial Agenda of the Obama Justice Department.”

“The reason they are doing this [threatening contempt] is because Barr is turning his attention to the real misconduct that occurred, namely using the U.S. government’s intelligence apparatus to target an opposition presidential campaign,” Adams, now president of an election integrity group called the Public Interest Legal Foundation, told The Daily Signal.

Rep. Jackie Speier, D-Calif., talked about handcuffs and jail for Barr on MSNBC, but got a skeptical response from liberal host Chris Matthews.

“Subpoenas are going to fly now, and when they are not complied with, we have what’s called inherent contempt proceedings, which means we send the sergeant [-at-] arms out to handcuff the individual who is declining to testify,” Speier said.

Matthews asked: “Who are you going to handcuff?”

Speier answered: “I’m going to start with Mr. Barr and bring him in.”

“Once there are specific subpoenas, and he does not comply with them,” the California Democrat later added, “he can be brought before the House. He can be tried. He can either be held there to testify, or he can be punished. And there is actually a jail in the Capitol, which has been used as recently as 1930.”

Although that’s going back almost a century, Cohen and Speier are legally correct about the authority of Congress.

In the 1821 case of Anderson v. Dunn, the Supreme Court held that Congress has the right to enforce contempt citations if the executive branch will not. Otherwise, the high court ruled, the legislative branch would be “exposed to every indignity and interruption that rudeness, caprice, or even conspiracy, may meditate against it.”

In 1927, the Senate sent the sergeant-at-arms to Ohio to arrest and detain former Attorney General Harry Daugherty’s brother Mally Daugherty in a probe that stemmed from the Teapot Dome scandal.

The Supreme Court upheld the action on the part of Congress. However, Congress no longer has its own jail; Capitol Police, however, maintain a holding cell.

Congress held administration officials in contempt of Congress in several other cases, but none resulted in incarceration.

After IRS official Lois Lerner refused to cooperate with the House’s investigation of the agency’s alleged targeting of tea party groups in 2013, the House voted to hold her in contempt of Congress. The Obama administration’s Justice Department declined to prosecute.

When President George W. Bush, a Republican, was in office, the Democrat-controlled House voted in 2007 to hold White House chief of staff Josh Bolten and White House counsel Harriet Miers in contempt of Congress for not providing information on the president’s firing of U.S. attorneys.

During Republican Ronald Reagan’s presidency, the Democrat-controlled House voted to hold Anne Gorsuch, administrator of the Environmental Protection Agency, in contempt for failing to provide information about a hazardous waste clean-up site.

Gorsuch was the first Cabinet-level administration official to face a contempt citation, according to The New York Times. Reagan’s EPA chief is the mother of Neil Gorsuch, now a justice on the Supreme Court.