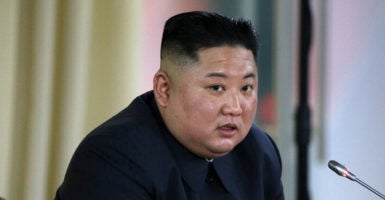 North Korea launched its first ballistic missile since 2017, in a move that is likely to signal displeasure with the stalled state of U.S.-North Korea nuclear talks.

The regime tested a new short-range tactical ballistic missile as well as a 300 mm multiple rocket launcher artillery system over the weekend. The missile traveled 45-125 miles, meaning it could have reached Seoul from the launching site.

The large-caliber multiple rocket launcher system is capable of targeting the new U.S. base at Camp Humphreys, south of Seoul, where U.S. forces relocated.

Secretary of State Mike Pompeo seemed to downplay the missile launch, noting that it did not violate Chairman Kim Jong Un’s moratorium announced in November 2017, which was focused on intercontinental ballistic missiles.

Yet South Korea has sounded a different note, declaring that it is “very concerned” by the North’s military activity. South Korean officials criticized Pyongyang for violating last year’s Panmunjom summit declaration and inter-Korean military agreement in which both Koreas pledged to cease all hostile acts that could raise military tensions on the Korean Peninsula.

It is harder to interpret a short-range launch than nuclear or long-range missile activity, which have diplomatic and security ramifications. This weekend’s launch could have been part of routine military exercises. Although the U.S. and South Korea have curtailed combined military exercises over the past year, Pyongyang has continued its usual pattern, and even recently completed its annual Winter Training Cycle with 1 million soldiers.

North Korea could instead be trying to pressure the U.S. toward greater flexibility in the stalled denuclearization negotiations. Kim recently declared that Washington had until the end of the year to make a “bold decision” to soften its position lest Pyongyang implement stronger but unspecified actions. At his meeting with President Donald Trump in Vietnam in February, Kim offered only limited denuclearization measures while demanding massive cuts in international sanctions.

The regime may also be trying to influence Seoul to further reduce allied military activity on the peninsula. Pyongyang recently criticized even the reduced scope of U.S.-South Korean military exercises, as well as Terminal High Altitude Area Defense (THAAD) missile defense training. The regime warned that any allied military exercises would be interpreted as U.S. hostility and would provoke “corresponding acts” on the part of the North.

After the Hanoi summit failed to reach a denuclearization agreement, the U.S. has sought meetings between Special Envoy Stephen Biegun and his North Korean counterpart. Yet Pyongyang has not responded to repeated invitations and has rejected South Korean requests for diplomatic and military meetings.

North Korean officials stridently blamed Pompeo and national security adviser John Bolton for impeding diplomatic progress. Pyongyang is now seeking another summit meeting with Trump, who Pyongyang sees as more likely to offer concessions, as he did in the Singapore summit.

It is important for the U.S. to not overreact to the minor North Korean military activity of this past weekend. Washington should neither resume escalatory “fire and fury” rhetoric, nor lower the negotiating bar on what is required of North Korea to come into compliance with the U.N.’s denuclearization requirements.