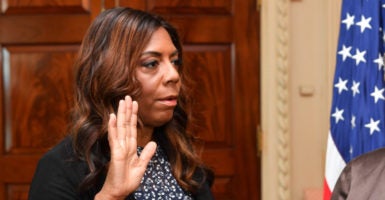 It’s fair to say most of the foreign policy establishment has no use for the president’s foreign policy. What they seem to hate even more is that it seems to be working.

The administration is putting the heat on authoritarian leaders in Latin America; stiff-arming Russian President Vladimir Putin in Europe; crushing the ISIS caliphate in the Middle East; empowering women in Africa; and going toe-to-toe with China and the North Korea in the Indo-Pacific.

Rather than harping on about President Donald Trump’s unconventional statesmanship, it might be time for an honest, nonpartisan discussion about why the president’s foreign policy is making headway, and how Washington can pull together to turn Trump’s unpredictable impulses into sustainable statecraft.

Sadly, the critics seem to be having none of it.

Kiron Skinner, who heads the policy planning staff at the State Department, gave an interview this week at the New America Foundation’s Future Security Forum. Describing her mission, Skinner said, “My job is to provide the intellectual architecture” of the Trump foreign policy. She went on to explain why Trump’s policies are working, thus starting the conversation we should all be having.

What Skinner got in response were the same old tropes. “State Department official has a really racist take on China,” read the headline from one commentator at the Center for American Progress. A New Yorker piece suggested the interview was “frightening.”

What was frightening was how glibly and thoughtlessly the critics dismissed a respected African-American businesswomen, scholar, and strong advocate for the civil rights movement as a racist.

Low blows aside, the unearned vitriol distracted from what should have been the start of a serious conversation.

One headline blared, “State Department Preparing for a Clash of Civilizations with China.” Skinner never called the American competition with China “a clash of civilizations.” That was a poor choice by the editor because it evoked the title of Sam Huntington’s 1996 book, which argued that the Muslim world and the West faced a coming religious, cultural, and ethnic struggle.

First of all, there’s a real question as to whether Huntington was right. Today, large masses of mostly Muslim countries side increasingly with Western powers and want to move closer, not further away, from us. Many Muslim countries are even more tolerant of Israel than they were two decades ago. Muslims also partnered in crushing the ISIS caliphate. The predicted cataclysmic divide hasn’t come.

But more to the point, that is not the kind of competition Skinner was describing. She simply pointed out that the U.S. and China are locked in an adversarial struggle. That’s a bipartisan consensus that few in Washington demur with.

She also pointed out that the U.S. and China have very different political systems, different value structures and cultural perspectives, different worldviews, and different goals. Again, not sure how that is headline news.

Kudos to Skinner for being the adult in the room and bringing up adult topics. Hopefully, Washington will bypass the cheap shots against her and debate the substance of her remarks, because her comments are the place to start when it comes to building a bipartisan vision and a consensus strategy that will help America meet the challenges of our time.

Such an adult approach will help keep America the admirable society that decent people on both sides of the debate believe we are—and want us to continue to be.