Where Race Relations Stand in 2019 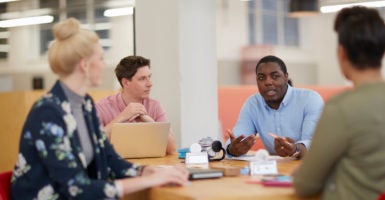 A recent Pew Research Center survey tackled a number of issues relating to race, and the outlook is grim. The survey showed a clear chasm between the way Republicans and Democrats view race in America.

As with any poll measuring intangibles, the survey raises more questions than it answers. One major data takeaway was that respondents said it is now more common for people to express racist or racially insensitive views.

Pew surveyed over 6,500 adults, most of whom blamed current racial divisions squarely on President Donald Trump.

As conservatives and African-Americans, we, the authors, have grown accustomed to the ire of liberals who believe our “America First” point of view is racist. We have actually been called racists because we believe building a wall is a sound policy.

The president does have a way of fanning the flames of division, but we wonder what the respondents would have said if asked about the media’s role in spurring racial division.

Here are some additional takeaways from the survey.

We actually believe that our government has gone too far in the wrong direction when it comes to “helping” African-Americans. The title of Jason Riley’s book, “Please Stop Helping Us: How Liberals Make it Harder for Blacks to Succeed,” comes to mind. Programs designed to improve life in black communities have in fact undermined progress toward material and economic equality.

For some reason, programs that encourage marriage are controversial, but programs that disincentivize marriage continue to win support. The incredible disadvantage for black students of having such a high single-parent rate simply cannot be overstated.

Race relations in the U.S. are generally bad.

According to the Pew survey, over 56% of white Americans and 71% of black Americans say race relations in the U.S. are generally bad. Over half of those surveyed believe the president has made things worse.

You will not find us making excuses for the president’s less-than-benevolent tone. We long ago stopped hoping he would behave in a more charitable manner. But we do believe that he expresses, albeit in a bombastic manner, the same sentiments of many past presidents on this issue. Yet because of his contentious relationship with the media, his words receive far more outrage than his predecessors.

Mainstream views, when uttered by the president, are considered racist. For instance, the media routinely paints Trump’s efforts at border security in strictly racist terms. But one only need do a quick Google search to find that political leaders from the left and right have long expressed the same views.

Despite the gloomy outlook given by the study, it’s important to note that the respondents’ answers are subjective. This study measured how people feel, not the actual progress (or lack thereof) that has been made. So while it is disheartening, it does not negate the real improvements that have been made for African-Americans.

The fact is that race relations in America have improved over the years. There was a time in our nation’s young history when lynchings of African-Americans were so widespread that Congress actually had to pass anti-lynching laws. In 1900 and 1901, 106 and 105 blacks were lynched, respectively. Clearly, this is not happening anymore.

On the other hand, the mere fact that blacks no longer have to fear lynching cannot be the standard of success or failure for race relations in the 21st century.

The good news is that blacks now have greater access to quality education, safe and secure housing, the ballot box, and jobs than ever before. In fact, the black unemployment rate is currently lower than it’s ever been on record. And more black children are now rising out of poverty to standards of living greater than their parents enjoyed.

These improvements were hard-earned and should be celebrated.

Yet on some other measures, things have gotten worse. The black out-of-wedlock birth rate is now over 70%, meaning more African-American kids today are facing unstable home lives than they were 50 years ago. The black family was critical in sustaining our communities during long decades of struggle, and its erosion has come at a heavy cost—especially to kids.

The full story is a mixed bag. We should celebrate the gains that have been achieved and make sure we craft public policies that encourage flourishing in the black community. And when it comes to rhetoric, our leaders should set an example. Words can make tensions flare, but they can also heal.