Elizabeth Warren’s College Plan Is a Bailout for the Elite 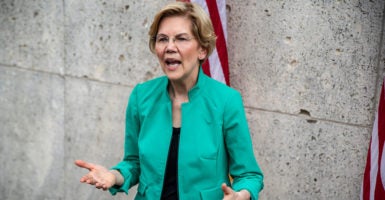 The federal student loan system has been a massive failure. Each year Washington invests more in higher education, topping out at $93 billion last year, yet students are more indebted and ill-equipped for the workforce than ever.

Despite the fact that economists have identified federal lending as the main driver of tuition inflation, Sen. Elizabeth Warren released a proposal that doubles down on failed federal education policies. The Massachusetts Democrat’s plan to make college tuition free and to eliminate student loan debt is a raw deal for American taxpayers, and is a gift on a silver platter to the elite.

Ultimately, loan cancellation is regressive. Only one-third of American adults hold a bachelor’s degree, and presumably, earn more than those who chose not to attend college. A report by the Urban Institute found that the top 25% of households by income hold almost half of all student loan debt, while the bottom 25% hold just 10%. It’s hard to escape the fact that debt cancellation proposals would reward higher-income households.

Additionally, tuition-free public college is a generous gift to colleges and universities, which will continue to raise tuition on the backs of American taxpayers. Nothing would prevent colleges from increasing costs on the heels of a huge new taxpayer subsidy.

A study from the Federal Reserve Bank of New York found that federal subsidized loans lead to as much as a 60-cent increase in tuition on the dollar. Schools have no incentive to lower tuition, because generous federal subsidies have created, effectively, unlimited access to loans and grants.

At least at this point students have to pay them back. Imagine how much costs would increase if federal taxpayers picked up the tab entirely.

For decades, many Americans have made smart financial decisions when deciding which higher education options to pursue. Some students work during the day and take classes at night. Others live modest lifestyles after graduation to ensure that they can afford their monthly student loan payments. Some even join the military and put their lives on the line for their country, so that they can have their college tuition paid for.

Debt cancellation tells those hardworking students that their sacrifices and planning will be treated the same as students who over-extended themselves, took on huge amounts of debt, and skipped their monthly payments. Aside from being a massively expensive and unwise undertaking for the country, this plan sends the wrong message to America’s young people.

Instead of whipping out the magic wand and erasing student loan debt (or, more accurately, moving your student loan balance into someone else’s account), we should be encouraging policies that put downward pressure on tuition prices and open the door to career-based education options.

Getting the federal government out of the business of higher education is the first step. Private student loans would turn off the open spigot of money flowing into universities and cause schools to start competing to offer the best education at the best price.

Second, policymakers must reform our accreditation system to make room for short-term, career-based programs to flourish. “Free college” proposals operate under the flawed assumption that all Americans would benefit from a four-year bachelor’s degree. However, many students would benefit from a skills-based program that would equip students for their desired career efficiently without the bachelor’s degree fluff.

Americans need better, more affordable higher education options. Instead, Warren’s plan ignores the system’s flaws, while ensuring that the universities keep cashing in on our tax dollars and students—including graduate students and law school students—walk away from their loan obligations.

With Americans $1.5 trillion in student loan debt, America needs policy proposals that cut to the source of the problem. Debt-cancellation plans that disproportionately benefit the well-off would only make it worse.