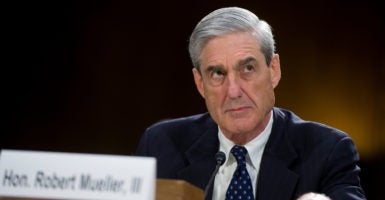 Objectivity, like Elvis, long ago left the building in Washington, and so the report by special counsel Robert Mueller is being read and interpreted through mostly biased eyes.

Democrats, who had counted on Mueller to prove that the Trump campaign colluded with Russia, were initially as crestfallen as they were on election night 2016.

Still, they are undeterred in the pursuit of their ultimate goal; namely, evicting the president from the White House in a political coup unprecedented in American history.

The special counsel was established to investigate collusion, though not by Donald Trump’s political opponents during the 2016 presidential race, who allegedly funded the infamous Steele dossier. It purported to describe Trump cavorting with prostitutes and other sick behavior during a visit to Moscow.

After more than two years of investigations, subpoenas, witness testimony, and millions of dollars wasted, Mueller’s report concluded: “The investigation did not establish that members of the Trump campaign conspired or coordinated with the Russian government in its election-interference activities.”

As for obstruction of justice, how does one obstruct something that’s not a crime?

Predictably, Democrats aren’t satisfied. Out of desperation and exasperation, some are alleging a cover-up by Attorney General William Barr.

Others want to immediately begin impeachment proceedings. For which high crime and misdemeanor?

They remember the electoral damage to Republicans when members of that party impeached Bill Clinton. Which wing of their party will prevail?

Politico represents the fallback position for some on the left: “Forget collusion with Russia and obstruction of justice.” Say what? “The most concrete takeaway from the 448-page Mueller report is its damning portrait of the Trump White House as a place of chaos, intrigue, and deception, where aides routinely disregard the wishes of a president with little regard for the traditional boundaries of his office … .”

Maybe so, but bad behavior and disobeyed presidential orders are not impeachable offenses. Let voters decide.

Imagine how Trump must have felt. Not only the establishment, which includes Democrats and Republicans, but the major media were constantly assaulting him starting before the election and ever since.

Some critics have accused him of paranoia, but as the saying goes, “Just because you’re paranoid doesn’t mean they’re not out to get you.” And out to get Trump they are.

Wall Street Journal columnist Kimberley Strassel writes: “President Trump has every right to feel liberated. What the [Mueller] report shows is that he endured a special counsel probe that was relentlessly, at times, farcically obsessed with taking him out.”

Republican National Committee Chairwoman Ronna McDaniel said: “It is increasingly clear that the only scandal here is the Obama administration’s repeated failure to act against Russian cyber-meddling, and instead, how they prioritized spying on a political opponent—the Trump campaign—and used a phony [Democratic National Committee]-funded dossier as justification.”

When President Barack Obama was asked about Trump’s charge that the 2016 election might be rigged against him, Obama responded: “No serious person out there … would suggest somehow that you could even rig America’s elections.”

Add this “witch hunt” to the long list of reasons many Americans hate Washington. None of this political show affects average citizens, who are benefiting from a booming economy, job growth, the lowest unemployment in half a century (including minority unemployment), and fewer people receiving food assistance.

What does this have to do with more important issues, including illegal immigration and foreign policy?

The left doesn’t want Americans to focus on the administration’s successes, because they are incapable of doing better. They can only repeat their familiar scenario of higher taxes, bigger and more controlling government, and “free stuff” for all.

The president and his allies have threatened a counterattack to expose corruption at the Justice Department, which created this fiasco. They should begin immediately.