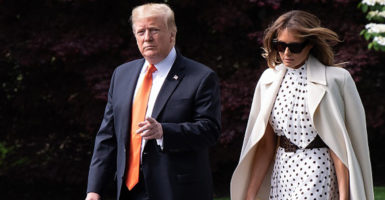 President Donald Trump and first lady Melania Trump walk to Marine One on Wednesday at the White House before departing for Atlanta. (Photo: Nicholas Kamm/AFP/Getty Images)

President Donald Trump called a Democrat-controlled House committee’s subpoena of his tax and financial records “ridiculous” on Wednesday, two days after his lawyers sued to block the compulsory request.

Legal experts predict the matter will end up as a separation-of-powers case before the Supreme Court.

The question likely would contrast a congressionally enacted statute making all tax returns confidential with the wide latitude Congress has for investigation, previously recognized by the high court.

“The subpoena is ridiculous. We have been, I have been, the most transparent president and administration in the history of our country by far,” Trump told reporters Wednesday at the White House.

The Justice Department last week released a lightly redacted version of special counsel Robert Mueller’s report on Russia’s interference in the 2016 election,  which cleared Trump and his campaign of conspiring with Russians but made no judgment on the question of obstruction of justice. Attorney General William Barr and his top deputy, Rod Rosenstein, decided evidence of attempted obstruction of the probe did not warrant criminal charges.

Trump characterized the House committee’s subpoena for tax records as a fallback once the Russia “witch hunt” didn’t work out for Democrats.

The special counsel’s office made no reference in the report to combing through Trump’s tax or financial records.

The president said: “We’re fighting all of the subpoenas. Look, these aren’t, like, impartial people.”

Cummings, in tweets Tuesday, expressed frustration at the administration’s lack of cooperation.

The Oversight Committee’s stated reason for seeking the records stems from Trump’s former personal lawyer, Michael Cohen, who told the committee about inconsistencies between what he knew and Trump’s public financial-disclosure forms.

“There is not a lot Congress can do to force him to comply to turn over tax records,” Curt Levey, president of the conservative legal group Committee for Justice, told The Daily Signal.

“Even if Congress demands Trump’s tax records, the IRS can note that Congress mandated confidentiality of tax records,” Levey said. “Democrats could next request records of Republican donors and leak them. Republicans in the executive branch could leak the tax documents of people behind requesting Trump’s tax documents. This could get very dangerous.”

“They are looking for a way to embarrass him,” Levey said. “Someone as rich as Trump, with so many businesses, likely used legal tax shelters that might be embarrassing, but aren’t illegal.”

The Internal Revenue Code, Section 6103, guarantees the confidentiality of all tax returns.

However, it would still likely be a matter the Supreme Court would have to eventually decide, given the context of a congressional subpoena in the course of oversight of the executive branch, Levey said.

“The Supreme Court takes interest in separation-of-powers arguments,” Levey said. “This is not something the administration will give up on, nor will the Democrats accept any compromise. So, it won’t be settled in any way. It has the hallmarks for a Supreme Court case.”

He said the matter might take a while to get that far—potentially until after the 2020 presidential election.

“There’s not a real reason to expedite it,” Levey said. “There’s not a pressing national security matter, or a matter of complying with a specific law or deadline.”

In that case, an anti-war group challenged a congressional subpoena. The high court determined the subpoena was “immune to judicial interference.”

French—a conservative, but a Trump critic—wrote that the subpoena has “more than a whiff of a fishing expedition,” but still predicted the precedent would be applicable in the case regarding Trump’s tax returns.

Interestingly, not long after Eastland, in 1976, Congress passed legislation making tax returns confidential and prohibiting disclosure of taxpayer information without the taxpayer’s consent.

The Congressional Research Service said the law—Section 6103—was passed because of revelations that President Richard Nixon, who resigned in 1974 over the Watergate scandal, sought to use tax return information for “improper purposes.”

In a prior Supreme Court ruling, in the 1957 case of Watkins v. U.S., the majority held that the House Un-American Activities Committee did not have the “power to expose [private information] for the sake of exposure.” That was particularly true regarding the “private affairs” of individuals.

In the aftermath of Watergate, Democrat Jimmy Carter was the first major-party presidential candidate to make public his tax returns. His Republican opponent, President Gerald Ford, provided a summary in 1976.

Since that time, every major-party presidential candidate except Trump has released his or her tax returns, according to FactCheck.org.

But the law doesn’t require their release. Trump did fill out a financial disclosure form in 2015, which is required for presidential candidates.

Hans von Spakovsky, a senior legal fellow at The Heritage Foundation, wrote about both the 1976 IRS law and the 1957 high court case in predicting Trump would likely win in the Supreme Court.

“House Democrats have tainted themselves, going after the tax returns,” von Spakovsky, a former Justice Department lawyer, told The Daily Signal. “The public might not understand the complexities of obstruction of justice arguments. But most understand the idea about seeing someone’s tax returns.”

“If they can demand the president’s returns, no one is safe,” he said.