I’m a College Student. Here’s Why I Oppose Socialism. 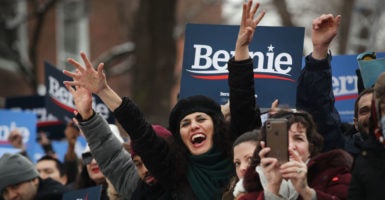 In the 2016 presidential primaries, 2.1 million people under age 30 voted for democratic socialist Bernie Sanders. But do young Americans really know what it means to live under socialism?

Cambodia, like other countries in the past and present, offers clear evidence of the outcomes of socialist policies such as the Green New Deal championed today by many liberals in the U.S.

Bopha Sayavong, a family friend of this reporter, lived in Cambodia in the 1970s when it was under both socialist and communist control. She survived the government’s work camps and was able to come to America in 1981.

“People that refer to themselves as the millennial [generation], they have no clue what socialism is,” Sayavong, now a pharmacist in Illinois, told me. “I lived in both socialism and communism, and then I lived in the world of the U.S. One thing I can tell you is there is no place like the U.S.”

>>> Related: A Teen Refugee’s Flight to Freedom From Communist Cambodia

However, the enthusiasm with which millennials advocate socialist policies suggests an ignorance about history, markets, and government. This is in part due to the failures of the education system.

Liberal arts courses in the United States are ripe with the opportunity to teach the proper context needed to understand the consequences of socialism and communism.

However, the education system’s failure to connect the dots leaves students with the impression that socialism is a venture yet to be tested.

“People think it’s so wonderful, it’s so fantastic, but that’s not true,” Sayavong said. “It’s just like a painting—it looks fantastic. But when you live in it, then you know it. It brings me pain to even think that our children go that far [consider socialism].”

American college students have the luxury of viewing the world from an ivory tower, combating injustice through thought experiments.

Students approach the world’s problems as if this were a game in which there are no consequences, and every variable is easily known and controlled. They say: “If we could remove markets, there would be no poverty, and if the government made the decisions, there would be no oppression.”

This critique of higher education has been made many times over many years by conservative academics. William F. Buckley Jr. shocked the academic world with his 1951 book “God and Man at Yale” and its scathing critique of the liberal bias at Yale University.

Still, to this day, higher education doesn’t provide a more rounded view of the world.

History classes fail to teach that notions such as socialism already have failed the test of time, and the outcomes have birthed nothing but pain and suffering.

For example, 2 million people died between 1975 and 1979 at the hands of  the communist Khmer Rouge regime. Headed by Pol Pot, that regime put Cambodians, including Sayavong’s family, in work camps.

That’s almost as many dead as the number of young Americans who voted in 2016 for Sanders.

Other such experiments include the Soviet Union, Vietnam, Cuba, and now Venezuela, all of which produced some of the most severe human rights violations known to man.

Economics classes in college fail to teach students that capitalism provided ubiquitous products such as the iPhone that almost every student takes for granted. These classes also fail to teach that competition and innovation provide affordable goods and services, as opposed to oppressing the poor.

Lauren Chen, a conservative YouTube blogger based in Canada, stated the issue clearly April 14 on “The Ben Shapiro Sunday Special” when she said: “Millennials don’t know who people like Pol Pot, or Stalin, or Mao are, which is kind of to me what being a millennial is all about—all of the enthusiasm with none of the knowledge.”

The swipe of a pen at the bottom of a nonbinding resolution “creating” the Green New Deal doesn’t eradicate poverty.

“I do believe in equality,” Sayavong told me. “I want … no rich, no poor, all even; but as a human being, think about it: If the government tells you what to do, how to eat, how to breathe, how could that be equal? They are above you.”

Firsthand experience with socialism and communism has been around to offset academia’s utopian visions for a long time.