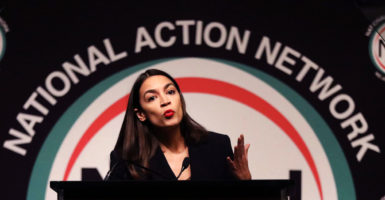 The Green New Deal’s goal is to move America to zero carbon emissions in 10 years.

“That’s a goal you could only imagine possible if you have no idea how energy is produced,” James Meigs, former editor of Popular Mechanics magazine, says in my latest video.

“Renewable is so inconsistent,” he adds. “You can’t just put in wind turbines and solar panels. You have to build all this infrastructure to connect them with energy consumers.”

Unfortunately, says Meigs: “You have to mine materials for batteries. Those mines are environmentally hazardous. Disposing of batteries is hazardous.”

“Batteries are a lousy way to store energy,” adds physicist Mark Mills, senior fellow at the Manhattan Institute. Also, the ingredients of green energy, like battery packs, are far from green.

“You have to consume 100 barrels of oil in China to make that battery pack,” he explains. “Dig up 1,000 pounds of stuff to process it. Digging is done with oil, by big machines, so we’re consuming energy to ‘save’ energy—not a good path to go.”

Still, wind turbines and solar batteries are 10 times more efficient than when they were first introduced. That’s not good enough, writes Mills, to make “the new energy economy” anything more than “magical thinking.”

The dream of “green” causes us to misdirect resources. Even after billions of dollars in government subsidies, solar still makes up less than 1% of America’s energy, wind just 2%. And even that energy isn’t really “clean.”

“We use billions of tons of hydrocarbons to make the windmills that are already in the world, and we’ve only just begun to make them at the level people claim they would like them to be built,” says Mills. “Pursue a path of wind, solar, and batteries, we increase how much we dig up and move by a thousandfold.”

“You gotta clear-cut the forest. These machines kill a lot of birds,” says Meigs. “I agree that we should bring down our carbon emissions … but we should also make sure we’re spending money on stuff that really works.”

There is one energy source, though, that efficiently produces lots of power with no carbon emissions; namely, nuclear.

But people fear it. They point to the Chernobyl plant accident in Ukraine and Fukushima in Japan.

“Fukushima helps prove how safe nuclear power really is. No one was killed.”

I pointed out that people were killed during the evacuation.

People fear what they don’t understand and what they can’t see.

“A dam breaks, and hundreds of thousands of people die. Nuclear plants, their safety, ironically, is actually evident in their accidents,” says Mills.

“More people have fallen off of roofs installing solar panels than have been killed in the entire history of nuclear power in the U.S.,” adds Meigs.

Yet after Fukushima, Germany shut down its nuclear plants. That led to higher electricity prices and increased carbon emissions, because Germany burned coal to make up for the loss of nuclear power.

If a Green New Deal is ever implemented, says Mills, it would rob the poor by raising energy costs, while “giving money to wealthy people in the form of subsidies to buy $100,000 cars, to put expensive solar arrays on their roofs, or to be investors in wind farms.”

Yet a majority of Americans—including Republicans surveyed—say they support some version of it.