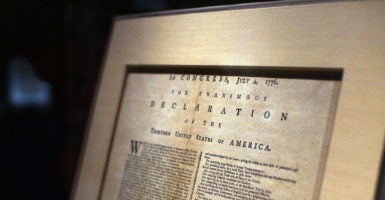 A page from the Declaration of Independence is displayed at the New York Public Library in New York City. (Photo: Spencer Platt/Staff/Getty Images)

On this week’s episode, hosts Jarrett Stepman and Fred Lucas discuss recent comments by Obama administration Attorney General Eric Holder, who recently said on MSNBC: “Exactly when did you think America was great?”

Lucas and Stepman discuss what makes America great and exceptional, and why critics such as Holder are wrong to focus entirely on its faults.

Also, Lucas had a chance at the recent Conservative Political Action Conference, or CPAC, to ask political commentator Glenn Beck about the left’s biggest distortion about American history.