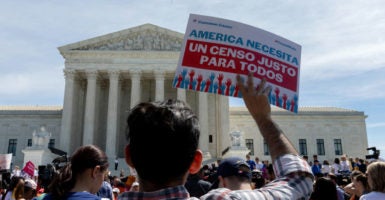 The Supreme Court heard oral argument on Tuesday, April 23, in a case over whether the Trump administration can include a question on citizenship in the 2020 census. (Photo: NurPhoto/Getty Images)

Oral arguments heard at the Supreme Court Tuesday were ostensibly about whether the 2020 census could include a question about citizenship.

But don’t be fooled. The reason this case rocketed to the Supreme Court and has been so hotly contested is that the debate hinges, at bottom, on two starkly different visions of America.

In one vision, what matters is loyalty to and affiliation with a nation-state that is self-contained, independent, civic, and colorbind. In the other vision, priority is given to one’s membership in a subnational group that is based on subjective self-identity (like race or sexual orientation), and association with that group yields benefits and preferences in everything, from hiring to contracting, employment, housing, and even electoral redistricting.

This is one of the great debates of our time—not just here, but around the world.

Whatever the Supreme Court decides—and an opinion is needed by summer if the Census Bureau is to meet its deadline of printing millions of forms—rest assured that this debate will not go away any time soon.

To paraphrase Mark Twain, reports of the death of the nation-state seem to have been greatly exaggerated. Despite pressure from above—from sovereignty-draining, transnational institutions like the United Nations and the European Union—and from below, i.e., from identity groups based on race, sex, ethnicity, sexual orientation, disability status, and anything else that can confer conceptual victimhood (and thus special rights) on an individual, the nation-state has shown remarkable resilience.

Defenders of the nation-state remind us that democracy, the rule of law, self-determination, liberty, and everything else Americans and like-minded people hold dear depend on territorially and culturally defined nation-states. Its opponents like to portray the nation-state as archaic, unnecessary, and a gateway to authoritarianism, if not worse.

The Trump administration has championed the sovereignist view, and in 2017 recognized the importance of citizenship by requesting that a question on citizenship be added to the 2020 census.

Progressive groups have left no stone unturned in their bid to frustrate the administration on this front. Notably, these same groups defend a panoply of other census questions that divide Americans by sex, ethnicity, and race.

These groups argue that the citizenship question would depress responses among certain marginalized groups, especially Hispanics. Yet the Census Bureau says it has no credible evidence that the question would affect the quality of the data.

Dozens of progressive organizations brought suit in New York, joined by 18 states and the District of Columbia. They won in district court in New York, thus the case Tuesday was Department of Commerce v. New York.

The hearing Tuesday did not in the least devote itself to these large questions of nationhood, sovereignty, and the like. Instead, there was a lot of technical and statistical back-and-forth between liberal justices and United States Solicitor General Noel Francisco, who represented the administration, and between the conservative justices and New York Solicitor General Barbara Underwood; Dale Ho, the lawyer for the New York plaintiffs; and Douglas Letter, the lawyer who represented the Democrat-controlled House of Representatives. All of these latter individuals argued against including the citizenship question.

It is difficult, as usual, to predict which way a court will go. Ho did his side no favors by admitting at one point that, yes, the Trump administration is right that citizenship data is needed to enforce the Voting Rights Act of 1965.

At issue is the fact that the Voting Rights Act does indeed call, in some places, for drawing districts where at least 50 percent of the voting population are members of a racial or ethnic minority.

Ho, perhaps unwittingly, made the case that “if the minority group has relatively low citizenship rates, for example, as is the case with Hispanic populations in some circumstances, then you need citizenship data to make sure that you’re drawing a district in which minority voters are, in fact, a majority of the population.”

That data is now provided by the American Community Survey, a smaller census product that goes out to fewer households. But some states, ironically including some of those suing the Trump administration, have complained that that data is not reliable.

Justice Neil Gorsuch thus jumped on Ho’s argument and pointed out that “some of the states who are now respondents before us have in litigation, including in this court, argued that [American Community Survey] data should not be relied upon for purposes of citizenship or other purposes, that the census data is more accurate. What do we do about that? It seems to me like you kind of put the government in a bit of a catch 22.”

It is the unified left that is in a catch 22, however—and the Voting Rights Act, as it is currently interpreted, put it there. The left does not mind (it in fact loves) the racial gerrymandering that is aided by census questions on ethnicity, race, and so forth. But because what is actually needed is voters, the administration can now say it needs citizenship data, since only citizens are allowed to vote.

The left is terrified by this prospect. It now realizes that available citizenship data will allow jurisdictions to apportion and redistrict seats according to voter, or citizen population, not total population, as they are constitutionally entitled to do. That would, for example, prevent liberal districts from swelling their numbers by adding populations of non-voting noncitizens or even illegal immigrants.

This essentially means citizenship data on the American nation itself—not arbitrary subgroups—would determine the shape of the House of Representatives, and the number and composition of electoral votes at election time. Our elections would more accurately represent the America that really exists, not the faux America envisioned by intersectional activists.

To win this issue, not just in the Supreme Court, but in the all-important court of public opinion, those who believe in the nation-state must constantly make the case that its view of the nation is nonracial, but instead is truly inclusive and colorblind. We must show that the other vision leads to balkanization, conflict, and ultimately, national splintering.