Liberals Are Using Rep. Ilhan Omar as an Excuse to Chill Speech 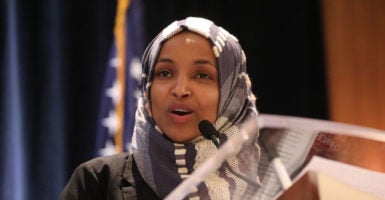 Democrats have spent the past two-plus years accusing the president of the United States and his allies of seditiously conspiring with our enemies to destroy “democracy.”

For the most part, this fairytale has been cynically deployed by politicians to undermine the legitimacy of a Republican presidency, yet millions of Americans now believe their votes were upended by a foreign power. There is no more serious charge against an elected official than treason.

Then again, for decades before the 2016 election, Democrats argued that Republicans were literally killing their fellow Americans when cutting taxes, murdering the sick when rejecting nationalized health care, and sentencing the poor to death when dismissing socialist schemes.

Not to mention suppressing the minority vote when asking for ID, engaging in Nazi-like actions when enforcing existing border laws, and destroying the world when failing to embrace a takeover of the economy. And so on.

This overwrought rhetoric is embedded in the everyday arguments of the mainstream left, and its intensity is only growing.

The same liberals are now demanding that conservatives stop quoting and posting videos of progressive Rep. Ilhan Omar belittling the 9/11 attacks, because doing so puts her life in danger. That’s quite the deal they’ve cooked up for themselves.

Nearly every presidential candidate and major Democratic leader has argued that Donald Trump’s criticism of Omar is out of line because of increased death threats against her. I do wonder how many death threats Trump or Senate Majority Leader Mitch McConnell or Rep. Steve Scalise receives every week. I imagine it’s considerable.

But as usual, most of the media took up the Democrats’ cause, trying to infantilize a 38-year-old woman. “Trump clearly unmoved over increased concerns raised by Dems over Omar’s safety,” noted CNN’s Manu Raju after Trump attacked House Speaker Nancy Pelosi’s handling of the Minnesota representative.

Do reporters and columnists consider the safety of the Trump administration before writing critically about it? I hope not. Because free speech—political discourse and good faith political reporting included—shouldn’t be inhibited by prospective actions of third-party nuts.

It is imperative, in fact, that we don’t let those nuts undercut our ability to freely express our political disagreements. If Americans pondered the actions of political terrorists every time they took a position, they would only be empowering criminals.

Not one of Trump’s critical comments about Omar called for violence in any way. He didn’t rationalize chasing Omar out of a restaurant or standing in front of her home with a bullhorn. The idea that politicians should have immunity from criticism is not something journalists, or anyone who values free expression, should give any credence. Yet, here we are.

Let’s remember one of the times we actually saw overt political violence was when a progressive activist and Sen. Bernie Sanders campaign volunteer attempted to assassinate the entire Republican congressional delegation. As far as I can tell, no one in the media asked Sanders or any other Democrats to temper their political rhetoric about Republicans.

If the reverse had occurred, we would have been plunged into a national discussion about right-wing rhetoric. (Wait, what am I saying, Republicans are already asked to take responsibility for violent actions of people who have nothing to do with them.)

Attempting to chill speech isn’t a new tactic for Democrats, and certainly not when it comes to Omar. As an African-American Muslim woman, the congresswoman has reached the pinnacle of special status, and thus any criticism, even quoting her verbatim or playing a video of her, is categorized as racist.

There are no specific guidelines for when it’s acceptable to be critical of the things an African-American Muslim woman politician says, though, for most people, the answer is “never.”

Of course, the notion that someone’s color or ethnicity or religion offers them dispensation from political debate is one of the most destructive aspects of this debate.

It was Democrats who chose to rally around Omar, celebrating her immigrant story and appearing with her on magazine covers. Now those Democrats are compelled to cover up and rationalize her incendiary comments.

There is no freshman-level Marxist gobbledygook or conspiracy theory that Omar won’t regurgitate, from claiming that the U.S. was “founded by genocide” to claiming that American power is built through “neocolonialism” to embracing morally decrepit ideas about the Middle East and Jews.

Democrats first covered for her actions by watering down an already-useless resolution condemning her anti-Semitic comments with a bunch of vacuous censures of all bigotry.

It is clear to me that Omar minimized 9/11, as she does Islamic terrorism in general. It’s clear to me she is a defender of theocrats and an apologist for terror organizations like Hamas. You might disagree. You can view her comments and decide for yourself.

Whatever the case, threats of violence against politicians are illegal and should be condemned by any decent person. In the end, though, whether Omar has increased threats against her or not, she is a public figure and deserves no special dispensation from debate.