College Refuses to Back Down After Protests Over Pence Speaking 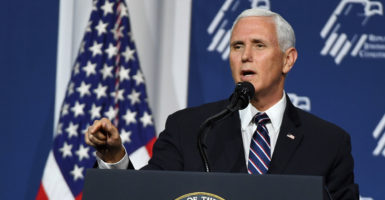 What’s so controversial about an evangelical college inviting an evangelical leader to speak? Absolutely nothing—unless that leader is Vice President Mike Pence.

Apparently, there isn’t anywhere the former Indiana governor can go these days without generating debate—including a Christian university in his own home state. But is the protest on Taylor University’s campus real—or just another orchestrated smear campaign by LGBT activists?

For the media, at least, the controversy at Upland’s small liberal arts school is a goldmine. Any time the press can drive the narrative that there’s trouble on the administration’s horizon with evangelicals, they’re more than happy to fan the flame.

The Washington Post did just that with a feature piece on the supposed outrage on campus. Pointing to a petition meant to be signed by students and alums—but has instead been co-opted by outside liberals—reporters seem intent on turning the visit into a bigger dispute than it actually is.

When we talked to Jim Garringer, the director of Taylor’s media relations, he said the university was prepared for reaction to the announcement—but nothing like this.

We knew at some level that there’d be people who’d be unhappy about it because of the perceived association with [President Donald] Trump, and we were ready for that … But we also knew people would greet it with excitement as well.

What’s caused the leadership so much heartburn, though, is the number of people who’ve reached out to Taylor and think the backlash is “a portrait of the entire university, which is not the case.”

Historically, he said, “Taylor has been a place that’s been able to draw students from different socio-economic backgrounds and affiliations. And one of the things that has made [it] such a special place is that we can lay those things aside and find [common ground in Christ].”

As for this idea that the whole campus is on a crusade to disinvite Pence, it’s simply not true. The lone Taylor grad who insisted he was “physically shaking” and felt “personally attacked” is not representative of the school or the student body.

“There are some people who are upset about it, and that’s their right,” Garringer said. “But large numbers of students are happy about it—and some others [who are on the fence] are interested in giving it a fair hearing. And ultimately, that’s what the university is about.”

Unfortunately, the media isn’t interested in talking about the majority on campus who are thrilled for the opportunity to hear from the homegrown vice president—a Hoosier himself, who reached the upper levels of power.

Despite the headlines and some manufactured hysteria, Taylor President Lowell Haines has no intentions of backing down. He praised the vice president as a “good friend to the University over many years,” and “a Christian brother whose life and values have exemplified what we strive to instill in our graduates.”

Sure, there’s been feedback from both sides of the aisle, he explained. But he’s not about to let LGBT intolerance hijack his campus. “Taylor University is an intentional Christian community that strives to encourage positive, respectful and meaningful dialogue,” and “we look forward to hosting the vice president next month.”