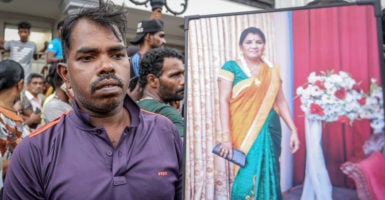 A Sri Lankan Catholic holds a photograph of his sister waiting to identify her dead body in front of the St Anthony's Church where an explosion took place in Kochchikade, Colombo, Sri Lanka, on April 21. (Photo: Tharaka Basnayaka/NurPhoto/Getty Images)

Terrorists killed over 200 people and wounded 450 others in Sri Lanka using coordinated explosive attacks on churches and hotels. Bombs erupted in churches in Negombo, Colombo, and Batticaloa and in the hotels Shangri-La, Kingsbury and Cinnamon Grand.

“The United States condemns in the strongest terms the terror attacks in Sri Lanka on Easter morning,” Pompeo said Sunday in a statement. “Attacks on innocent people gathering in a place of worship or enjoying a holiday meal are affronts to the universal values and freedoms that we hold dear, and demonstrate yet again the brutal nature of radical terrorists whose sole aim is to threaten peace and security.”

Pompeo offered the U.S.’s deepest sympathy to the victims and families targeted in the attack. “The U.S. Embassy is working tirelessly to provide all possible assistance to the American citizens affected by the attacks and their families,” he said in the statement, adding:

These vile attacks are a stark reminder of why the United States remains resolved in our fight to defeat terrorism. We stand with the Sri Lankan government and people as they confront violent extremism and have offered our assistance as they work to bring the perpetrators to justice.