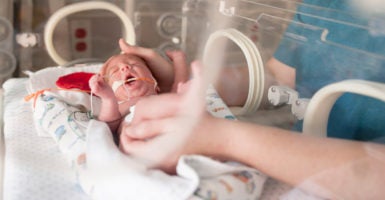 Zachary Mettler, not pictured above, was born 11 weeks shy of his due date. (Photo: Jill Lehmann Photography/Getty Images)

Zachary Mettler is a member of the Young Leaders Program at The Heritage Foundation.

“My body, my choice.” This is a common slogan among those who are pro-choice.

It’s a handy little slogan. Any pro-choice woman can use it to immediately shut up a pro-life man, since his opinion doesn’t count, no matter the merits of his argument.

But what about my story?

On March 29, 1997, my parents were driving through Minnesota when my mom suddenly began having contractions. Immediately, they drove to the hospital, and two days later I was born—11 weeks early.

When my mom gave birth to me at 29 weeks, I weighed just 2 pounds and 15 ounces, though I soon dropped down to 2 pounds and 9 ounces. The doctors had delayed my birth as long as possible to allow my lungs to develop. Those extra two days were the only reason I came out breathing on my own.

I needed a feeding tube at that stage because babies born that early don’t know how to suck. Other than that, there were no complications and no problems. For this, I praise God. I just needed more time to develop.

After a five-week stay in the hospital, my parents brought me home, and I’ve lived a normal, healthy life ever since.

Back to the slogan, “My body, my choice.” Someone who is pro-choice might say my views are irrelevant because it’s only the woman’s body that is affected and not my “male” body.

But what if my mother had lived in one of the nine states or the District of Columbia, where a woman can obtain a legal abortion up to the moment of birth? What if, instead of driving to the hospital, my mom had driven to an abortion “clinic” where, in nine states, she could have legally killed me?

Think about it. In nine states plus D.C., a woman can legally abort her baby who is more developed than I was when I was born. And even in states with bans in place at a certain gestational age, some states have created loopholes so broad that a woman can get an abortion up to the time of birth for virtually any reason.

The left often says a baby isn’t a person until they are viable and can survive outside the mother’s womb. Let’s say that’s the case, and that a baby becomes a person when they are viable.

Can we not all then agree that abortion should be illegal after 24 weeks, when a baby is considered “viable?” Why should it be legal to kill a baby who is as developed or is more developed than I was at birth?

Recently, New York passed a law expanding access for women to have an abortion in the third trimester, after 24 weeks.

Now, for years the left supported a woman’s right to an abortion, but they wanted it to be safe, legal, and rare. Remember that language? Hillary Clinton, when campaigning for president in 2008, said that abortion should be “safe, legal, and rare, and by rare, I mean rare.”

Since then, the left has moved backward.

Michelle Wolf, in a horrifying display to rational people, performed a “Salute to Abortion,” saying, “If you want an abortion, get one!” while tossing confetti from a party hat.

Vermont Sen. Bernie Sanders, in a recent town hall event with Fox News, was asked if he believed a woman should be able to abort her child up until the time of birth. He answered that “at the end of the day, the decision over abortion belongs with a woman and her physician,” and no one else.

Sanders is apparently OK with a mom driving to an abortion clinic instead of a hospital to kill their baby at 29 weeks—of the full 40 weeks for that matter—rather than give birth to a live and fully healthy baby.

Indeed, the United States is one of only seven countries to allow elective abortions after 20 weeks of pregnancy. If this shocks and dismays you, it should. And if you want to do something to change this, you should.

Here are a couple suggestions on ways you can take action.

First, go see the new movie “Unplanned” in theaters. It is a very well done movie that simultaneously presents the truth of abortion, while encouraging a culture of forgiveness and love.

Second, raise your voice to elected officials. There are a number of pro-life bills sitting in Congress that would protect life, but are not moving with the speed they deserve.

I am forever grateful for my mother who cared for and provided for me, especially since I was born so early. I pray we all work for an America where every child has a chance at life—a chance that I am so thankful for.