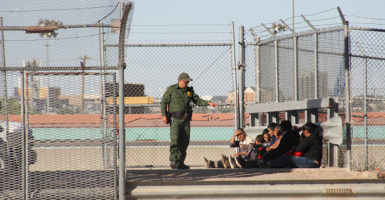 Attorney General William Barr has announced a new asylum policy to curb the government’s practice of catching illegal immigrants and then releasing them into the nation’s interior.

The American Civil Liberties Union already has vowed to challenge the change in court even as President Donald Trump seeks to use all legal tools at his disposal to control the flow of illegal immigrants.

The Justice Department contends that the attorney general is enforcing the text of the Immigration and Nationality Act, in line with a Supreme Court ruling last year.

Barr is on firm legal ground, the department says, in determining that illegal immigrants who seek asylum are not eligible for release on bond until their case is adjudicated.

Barr’s decision is already effective, so the Department of Homeland Security can conduct planning for additional detentions and parole decisions.

Here’s three things to know about the attorney general’s decision.

1. How Barr Came to the Decision

The decision has been in the works since Oct. 12, 2018, when Barr’s predecessor, Attorney General Jeff Sessions, directed the Board of Immigration Appeals to refer the detention of asylum-seekers for review. Sessions invited interested parties to submit briefs.

The question before the attorney general was whether, under the Immigration and Nationality Act, illegal immigrants who are transferred from removal proceedings after establishing a “credible fear claim” are eligible for release on bond.

A credible fear claim is when an illegal immigrant provides a sufficient case that he or she will be persecuted if deported back to his or her own country.

Barr took over review of the pending decision. On Tuesday, he asserted that the answer is no—illegal immigrants with a credible fear claim are not eligible for release into the interior of the United States.

The attorney general’s decision overrules a 2005 conclusion by the Board of Immigration Appeals that made the opposite determination.

Referring to the Department of Homeland Security and one of its subsidiary agencies, Immigration and Customs Enforcement, Jenks told The Daily Signal:

DHS will still be operating without sufficient detention space to hold most asylum-seekers, under a court settlement that bars them from holding children for more than 20 days, and under an Obama-era parole policy that requires ICE to grant parole to those they have to release from detention. Because ICE has failed to reverse the parole policy and because Congress has completely abdicated its responsibility to address legal loopholes, unaccompanied alien minors and family units will continue to be released into American communities in unprecedented numbers.

2. Does This Solve Catch and Release?

Barr’s goal is to close “catch and release” loopholes, according to the White House.

Asylum-seekers at the border have to meet only a low bar for establishing “credible fear,” and don’t have to provide verification or corroboration of their claims, the Trump administration contends.

Today, around 1 in 10 illegal aliens arriving at the southern border claims credible fear, up from around 1 in 100 prior to 2013, according to the White House.

Fewer than 10% of those whose credible fear claim was deemed sufficient in 2018 ultimately were approved for asylum.

However, the Barr decision doesn’t affect the family units coming to the United States through Mexico, only individuals. A federal court decision prevents minors from being held by the government for more than 20 days.

“[Barr’s decision] will deter some abuse of the asylum process,” Ira Mehlman, spokesman for the Federation for American Immigration Reform, told The Daily Signal, adding:

It won’t affect the prevention of holding children more than 20 days. The largest amount of asylum abuse comes from family units, about 60%. But, I don’t want to make the perfect the enemy of the good. We support anything to discourage asylum abuse.

Catch and release is a problem because illegal immigrants often enter the country and, after claiming asylum, cannot be turned back.

Trump has been pushing Congress to fund more detention space for Immigration and Customs Enforcement, as well as to fund more immigration judges to expedite removal cases.

Because of the shortages of detention space and judges, the system releases illegal immigrants who make asylum claims into the interior with an order to come back for a deportation hearing or credible fear interview.

Since such proceedings may take as long as eight years because of the backlog of cases, many illegal immigrants never return for the hearing, said Art Arthur, a former immigration judge who is now a resident fellow for law and policy at the Center for Immigration Studies, an immigration think tank.

Barr determined that under the Immigration and Nationality Act, illegal immigrants who are subject to expedited removal proceedings—but establish a credible fear of persecution—must be detained until the conclusion of their proceedings.

That’s unless the Department of Homeland Security paroles the illegal immigrant, according to a senior Justice Department official.

3. What the Law Says

Immigration courts, which decide deportation and asylum cases, are part of the Justice Department, not the judiciary branch.

The Board of Immigration Appeals has oversight of rulings by immigration judges. The attorney general has final say.

So, the parallel to a regular judicial proceeding is that the attorney general is like a one-man Supreme Court for these immigration matters.

Immigration cases may be filed in federal courts—separate from immigration courts—if the question regards a constitutional matter.

A senior Justice Department official referred to Section 235(b)(1)(B)(ii) of the Immigration and Nationality Act. The provision states that an illegal immigrant with a credible fear claim “shall be detained for further consideration of the application for asylum.”

The Department of Homeland Security has the ability to parole the illegal alien under the law.

Barr determined that the text of the law mandates his conclusion that such illegal immigrants are ineligible for bond until after their hearings, the official said.

This is the case whether the migrant crosses the border illegally or comes through a legal port of entry.

Barr also relied on a Supreme Court ruling last year, Jennings v. Rodriguez, in which the high court determined that detained immigrants do not have a statutory right to a bond hearing.

“This is a good step on his part,” FAIR’s Mehlman said of Barr. “The Supreme Court says he has the authority. … The lawsuits are about running out the clock. You can always find a federal judge to say the sun will come up in the West tomorrow, if that’s what you want.”