In Paris, Our Cathedral Lies in Ruins 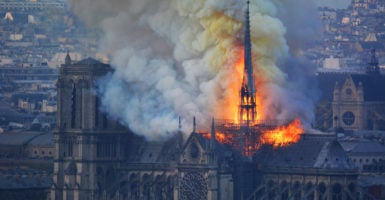 Kate McKenna is a communications consultant based in Paris, France. She has been a contributor on several French news outlets including, BFMTV, BFMradio, France 2, France 5, and FranceInfoTV.

PARIS—Many of us Americans have strolled the banks of the river Seine across Île de la Cité, listening to the bells of the famous towers of Notre Dame.

It’s been a landmark in Paris for over 800 years, having been built in the 13th century. A center of worship and political triumph, this symbol of France has survived two world wars.

On Monday, in the early evening hours, this French national Christian treasure began to burn.

As I write this, the roof and spire have crumbled. Workers are quickly attempting to salvage priceless portraits, paintings, and holy relics. Observers pass by in shock. My French friends and family are in tears.

What else can be done? That is the question.

The other question: How did this happen? How did two hours of blaze reduce so much of 800 years of work to ash?

What many people do not know is that Notre Dame is the third church in Paris to be damaged or in flames in just the past few months.

In mid-March, a similar scene played out in Saint Sulpice, in the sixth arrondissment (district) of Paris. This fire was a criminal act.

Another attack occurred on the Basilica of Saint Denis. Located in the north of Paris, this basilica houses the tombs of many kings and queens of France, which were violated and destroyed, along with the organ. This also was a criminal act.

In fact, in 2017 alone the French government recorded 878 attacks on Christian artifacts or churches.

These churches serve great purpose—for the faithful, of course, but also as a reminder of France’s heritage. In Paris, like in so many places in France, every turn of a corner is a run-in with history.

No revisionist professor or politician ever can erase those heavy thick walls that declare France’s inheritance and past.

The French are known for their stubbornness and patriotic pride. I hope they will be able to activate it to the fullest to rebuild, restore, and protect. Vive la France.

Note: This article has been updated to reflect the author’s name, and the number of attacks on Christian artifacts or churches in France in 2017.