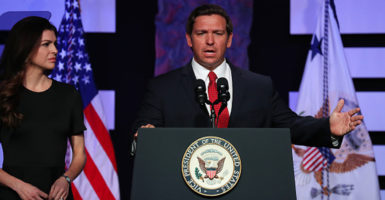 As his first legislative session winds down, Florida Gov. Ron DeSantis—elected five months ago by the narrowest of margins—has soared in popularity while pursuing an aggressive reform agenda that includes reshaping the state’s judiciary, investigating school safety, and enforcing immigration laws.

“He’s off to a fast start. He’s a trailblazer throughout the state,” Scott Parkinson, who served as chief of staff for DeSantis in the U.S. House of Representatives, told The Daily Signal.

“As a member of Congress, he had to be a consensus builder and build coalitions. As a governor he can lead on principle. He has such a unique life experience to be a leader,” Parkinson said.

DeSantis, 40, is a graduate of Yale and Harvard Law. He went on to serve as a Navy JAG officer, as an adviser to Navy SEALs in Iraq, and as counsel for the U.S. detention center for suspected terrorists in Guantanamo Bay, Cuba, before first being elected to the House in 2012.

Parkinson, now vice president of government affairs at Club for Growth, a conservative business advocacy group, said that when he saw DeSantis in late February, the governor was in active mode.

“He said he had been to his fourth city in a day,” Parkinson said. “He’s not tied to a desk in Tallahassee. He demonstrates leadership.”

DeSantis is a husband and father, too.

In 2010, the Jacksonville native married the woman who would become first lady of Florida—Casey Black DeSantis, an Emmy Award-winning TV host. They have one daughter, Madison, and a son, Mason.

“Not surprisingly, he has had a bold agenda that has been both conservative and practical,” Sal Nuzzo, vice president for policy at James Madison Institute, a Tallahassee-based conservative think tank, told The Daily Signal.

“It is a policy-driven bold agenda, but it is refreshing to some Democrats and, in some cases, former opponents.”

At DeSantis’ request, the Florida Supreme Court in late February ordered a statewide grand jury to investigate whether school administrators are violating any laws and potentially endangering students.

“What’s truly devastating is that the tragedy in Parkland was avoidable,” DeSantis said in a written statement. “As governor, I have a moral obligation to protect the children in our state, which is why I have requested a statewide grand jury to investigate school safety practices and failures occurring around the state and to identify measures to improve the safety of our students.”

On Feb. 14, 2018, a former student with a rifle left 17 dead and 17 others wounded at Marjory Stoneman Douglas High School in Parkland, Florida.

The shooter was known to have become violent in the past, but school officials reportedly ignored numerous warning signs at a time when the school district was promoting a politically popular alternative discipline policy.

Still, Democrats in the state oppose the governor’s support for arming teachers, as do most voters despite giving DeSantis high marks, according to polls.

“Florida voters have stated loudly and clearly that they don’t want guns in our schools, yet DeSantis and Republicans continue to push legislation that would do exactly the opposite,” Florida Democratic Party Chairwoman Terrie Rizzo said in a formal statement.

“Teachers don’t want this, parents don’t want this, our state does not want this,” Rizzo said. “This bill threatens the safety of our students and teachers. It’s time for Republicans to drop the NRA’s dangerous agenda and start focusing on the issues Floridians care about.”

In what could be his biggest legacy accomplishment, DeSantis quickly reshaped the Florida Supreme Court from a 4-3 liberal majority to a 6-1 conservative majority.

Florida has mandatory retirement ages for its state Supreme Court justices. In 2018, voters approved a measure raising that age from 70 to 75.

“He named three justices and changed the Supreme Court for a generation,” Parkinson said. “Even though we’ve had Republican governors since the 1990s, none [has] had a Supreme Court to back them up.”

The significance of state supreme courts should never be underestimated, said Carrie Severino, chief counsel to the Judicial Crisis Network.

“It is an incredibly significant shift,” Severino told The Daily Signal, referring to Florida’s highest court. “It was one of the more liberal state supreme courts in the nation. It has gone from a 4-3 liberal majority to a 6-1 constitutional originalist majority.”

“The Florida Supreme Court was regularly causing trouble for Rick Scott,” she said of DeSantis’ Republican predecessor. “About 90% of all cases are heard in state courts, and state supreme courts are often the last word on an array of issues.”

The measure requires the state to “equip high school graduates with sufficient knowledge of America’s civics, particularly the principles reflected in the United States Constitution, so as to be capable of discharging the responsibilities associated with American citizenship.”

The governor also opened up avenues for school choice for parents, including vouchers for private school.

“I have heard parents from across the state loud and clear, and they all agree that it is time to finally end Common Core,” DeSantis said in a formal statement in late January, adding:

So today, we are taking action through this executive order to ensure that Florida has the best academic standards in the nation and eliminating Common Core from our schools, as well as reaffirming my commitment to prepare our students for the real world through an increased focus on civic education.”

DeSantis held a summit Jan. 31 with state agency chiefs, called “Florida Deregathon,” which resulted in rolling back the state’s occupational licensing requirements. The governor’s office sponsored the event in conjunction with the Department of Business and Professional Regulation and several state professional licensing boards.

In an effort to correct a past wrong—at least for the record—DeSantis issued posthumous pardons to the “Groveland 4,” four black men accused of raping a 17-year-old white girl in 1949.

The men were victims of mob violence and police shootings during the South’s Jim Crow era. The Executive Clemency Board unanimously approved the governor’s pardons.

“For 70 years, these four men have had their history wrongly written for crimes they did not commit,” DeSantis said, adding:

I believe the rule of law is society’s sacred bond. When it is trampled, we all suffer. For the Groveland 4, the truth was buried. The perpetrators celebrated. But justice has cried out from that day until this.

Before the suspension, deputies from the Pasco County Sheriff’s Office showed up at Massad’s house with an arrest warrant on charges of illegally practicing medicine at home without a license. The mayor allegedly began shooting at them.

DeSantis announced Tuesday that he would lead a business development mission to Israel in late May, to boost economic ties between Israel and Florida.

“I promised to be the most pro-Israel governor in America and that the first delegation I would lead would be to the state of Israel,” DeSantis said on the same day as Israel’s elections.

“Today, I’m pleased to report that I’m keeping that promise,” he said. “Our delegation will bring business, academic, and political leaders to help strengthen the bond between Florida and Israel.”