Once Again, a Liberal Activist Judge Is Halting a Sensible Immigration Policy 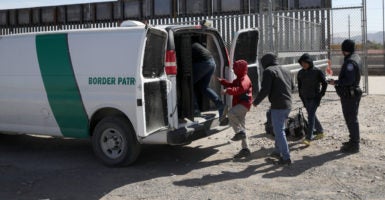 A U.S. Border Patrol agent loads detained migrants into a van at the border of the United States and Mexico on March 31 in El Paso, Texas. (Photo: Justin Sullivan/Getty Images)

If you look up the phrase “activist judge” in the liberal lexicon, one of the names that will no doubt appear at the top of the list is Richard Seeborg, a federal district court judge in San Francisco appointed by President Barack Obama.

Earlier this month, Seeborg issued a nationwide preliminary injunction against the Trump administration’s sensible asylum policy. This isn’t Seeborg’s first act of judicial activism: He is also the judge who issued a similar injunction against reinstating a citizenship question on the U.S. census based on the claim that to do so would violate the Constitution. That case is now before the U.S. Supreme Court..

When it comes to judge shopping, it is no wonder liberal advocacy groups keep going to his courtroom.

The Trump administration is now fighting Seeborg: A few days after the injunction, the Justice Department appealed to the 9th U.S. Circuit Court of Appeals and filed an emergency motion asking for a stay of Seeborg’s order pending the appeal.

In Innovation Law Lab v. Nielsen, Seeborg held that the Department of Homeland Security cannot enforce its “Migrant Protection Protocols.” The protocols say that non-Mexican asylum-seekers—with certain exceptions—arriving in the U.S. across our southern border will be returned to wait in Mexico until the validity of their asylum claim is determined.

Seeborg asserts that he is not making his decision based on whether the Migration Protection Protocols “is a wise, intelligent, or humane policy, or whether it is the best approach” because such policy decisions “remain for the political branches” to make and implement. But then he proceeds to do exactly that, although he attempts to disguise his judicial policymaking by claiming the protocols aren’t authorized by federal law and violate the Administrative Procedure Act, which governs the issuance of new regulations by government agencies.

In essence, Seeborg is refusing to allow the Department of Homeland Security to exercise the clear and unambiguous statutory authority it is given by Congress under 8 U.S.C. §1225 (b)(2)(C). Former Homeland Security Secretary Kirstjen Nielsen announced in December that the department was “invoking” its authority under this immigration provision.

As the emergency motion filed with the 9th Circuit says:

The United States and Mexico face a humanitarian and security crisis on their shared border. In recent months, hundreds of thousands of migrants have left their home countries in Central America to journey through Mexico and then across the southern border of the United States, where they often make meritless claims for asylum and yet—because of strains on our resources—frequently secure release into our country.

In just the month of March, Homeland Security apprehended more than 92,000 illegal border-crossers, “a pace of more than 1 million per year and nearly double what it was just months ago.” Homeland Security also reported “encountering 53,000 migrants as part of family units (many with children), a number never before seen.” The “extraordinary volume of crossings has severely burdened DHS’s ability to control the southern border.”

According to the Justice Department’s brief in the district court, the Department of Homeland Security invoked its authority under this statute to “address the growing problems at the southern border resulting from the number of aliens apprehended along the southern border who claim a fear of return to their home country far exceeding the Executive’s ability to process such aliens and capacity to detain them.”

Many who would otherwise be detained are being “released into the United States—to reside for years without establishing an entitlement to relief or admission, and many of whom never show up for their immigration proceedings and are ordered removed in absentia.”

The statute allows the secretary of homeland security to “return” any aliens “arriving on land (whether or not at a designated port of arrival) from a foreign territory contiguous to the United States … to that territory pending a proceeding.”

In other words, any aliens coming into the country across any of our contiguous land borders who claim they have a legal right to be here can be returned across the border back into Canada or Mexico and forced to wait there while their immigration proceeding is pending.

There is an exception in the Department of Homeland Security guidance that provides that the alien will not be returned if there is a likelihood of harm in Mexico. But the government says in its brief that the Mexican government has represented that aliens returned to Mexico under the Migration Protection Protocols would be afforded “‘all legal and procedural protection[s] provided for under applicable domestic and international law.’”

As part of the protocols, Homeland Security is exercising its prosecutorial discretion to apply the regular (not the expedited) full removal process to all non-Mexicans apprehended along the southern border who claim asylum.

But Seeborg ignores this distinction and misreads the plain text of the statute to conclude that the government cannot apply the return provision to any aliens claiming asylum. As the Justice Department tells the 9th Circuit, Seeborg’s “interpretation is atextual and internally inconsistent.”  Essentially, Seeborg reads the return authority of Homeland Security right out of the immigration statute.

By the way, Mexico has a very generous asylum law of its own. No non-Mexican aliens arriving at our southern border who didn’t claim asylum under Mexican law the moment they arrived in Mexico have a credible claim to asylum in the United States.

According to Homeland Security, four out of every five asylum claims made at the southern border turn out not to be valid. Aliens are instead using fraudulent asylum claims as a passport into the U.S. and a get-out-of-detention-free card to then disappear into the interior of the country.

Seeborg shouldn’t even be reviewing the Migration Protection Protocols in his courtroom since, as the Justice Department’s brief pointed out, another provision of federal immigration law, 8 U.S.C. §1252, bars judicial review of decisions made by the secretary that are given to his discretion, which is exactly what the alien return provision does. Yet Seeborg ignores this statutory limitation on his authority, too.

The government also argues that the Administrative Procedure Act, which Seeborg relies on to override the explicit language of the immigration provision on the return of aliens, can’t be used because the act by its own language does not apply to “general statements of policy.” Here, Homeland Security says it made a general policy announcement that it would be applying the statutory provisions of 8 U.S.C. §1225 (b)(2)(C).

Unfortunately, given the liberal make-up of the 9th Circuit, the Justice Department will likely have no success in its request for a stay. It will probably be up to the Supreme Court once again, just as in the travel ban case, to eventually right this miscarriage of justice. But that needs to happen quickly given the growing crisis at the border. As the government says in its emergency filing:

The district court’s injunction will impose immediate, substantial harm on the United States, including by diminishing the executive branch’s ability to work effectively with Mexico to manage the crisis on our shared border.  That harm is exacerbated by the court’s decision to exceed limitations on its equitable authority and issue a universal injunction.

Just another example of a single federal district court judge going far beyond the bounds of his authority and interfering with the president’s ability to deal with a national security and humanitarian crisis.