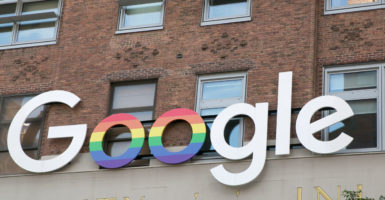 A petition signed by some 2,500 people at Google, dozens of universities, and woke companies accused The Heritage Foundation's president of being “anti-trans, anti-LGBTQ and anti-immigrant.” (Photo: George Rose/Getty Images)

The left must control the narrative. It will be nasty about making sure it does and won’t care for niceties. It is part of “the will to power” that propelled Lenin and Mussolini to rule. Only this time a gaggle of coddled, probably mostly white, liberals at Google and academia have taken on more than they can handle.

Meet my boss, a stately lady from old Richmond. She grew up eating deep-fried frog legs her brothers and her father fished out of the pond out back. She then became one of two dozen black children who integrated a school in the erstwhile Confederate capital, braving taunts, shoves, and being stuck with pins.

Around here, we call her “Mrs. James.” The rest of the world knows her as the president of The Heritage Foundation, Kay Coles James.

Earlier this year, Google invited James to join an artificial intelligence advisory council that would exchange views to help guide Google’s policies in this area. No sooner was this announced that some Google employees circulated a petition demanding that the Mountain View, California, tech giant remove her from the post.

The petition was eventually signed by some 2,500 people, not just at Google, but at dozens of universities in the United States and Canada and woke companies such as Lyft and Vox Media. The company gave in to the mob last week and disbanded the council.

James’ transgression? The petition accused her of being “anti-trans, anti-LGBTQ and anti-immigrant,” and produced as evidence three tweets.

James is none of those things. She has traditional conservative views, as a mere scan of the tweets will reveal. In fact, we invite you to go further than tweets and read our papers on these and other issues at Heritage.org.

Traditional conservative views are held by the executive and a majority of the U.S. Senate, as well as the majority of the state houses and legislatures in the 50 states. Somebody must have elected them. So what’s up?

Since Antonio Gramsci, an influential Italian communist in the first part of the 20th century, the left has called society’s traditional views “the hegemonic narrative.” Gramsci observed in the 1930s that Marx had a century earlier forecast that the working class would rise up, yet not many revolutions had happened.

The problem, he thought, was that the worker was being acculturated to do the bidding of his master. He had “false consciousness” and would need to be indoctrinated out of it.

“Man is primarily a creature of spirit—that is, a creation of history, rather than nature. Otherwise, it would be impossible to explain that why it is that, when the exploiters and the exploited have always existed, socialism has never yet come into being,” wrote Gramsci.

The answer, Gramsci and his many disciples in academia later on would find, was to undertake what the German radical academic Rudi Dutschke in the 1960s called “The long march through the institutions.” That is, society would have to be subverted from within by taking over the institutions of learning and culture-making.

The reference—lest the reader miss it—is to “The Long March” that Mao’s band of communists undertook in the frigid winters and long hot summers of China in the 1930s, before defeating the Kuomingtang in 1949. It has been attributed to Gramsci himself, but as the late professor Joseph A. Buttigieg, one of the nation’s foremost experts on Gramsci (and father of the mayor of South Bend, Indiana, Pete Buttigieg) pointed out, does belong to Dutschke.

To transform “the facts of vassalage into triggers of rebellion and social construction,” Gramsci wrote, revolution would have to be preceded “by an intense labor of criticism, by the diffusion of culture and the spread of ideas amongst masses of men who are at first resistant.”

And there would have to be what another Gramsci acolyte, the German-American Columbia University professor Herbert Marcuse, called “Repressive Tolerance.” Writing in 1965, he called for “the practice of discriminating tolerance in an inverse direction, as a means of shifting the balance between Right and Left by restraining the liberty of the Right, thus counteracting the pervasive inequality of freedom.”

As Rodney Fopp wrote, Marcuse’s argument “was trenchantly criticized because it was anti-democratic and defied the academic canon of value neutrality. Yet his argument is attracting renewed interest in the 21st century.” Indeed.

These are the forebears of the Google petition signers. Having taken over most of the academy, Hollywood, and the media, they have set their sights on the new commanding heights, the internet. Thus, we see this bias not just at Google, but also in Twitter, Facebook, and the others.

As professor Paul Kengor—one of the few non-leftists in that field—recently pointed out, even Wikipedia is getting in on the act by attempting to smear any discussion of Gramsci and the rest.

What can conservatives do? Supporting regulating tech giants is a tempting option—one that must be resisted. Google, Facebook, Twitter, and the others would thrive in it, as monopolists always do. That is why they’re asking for it.

But we can refuse to be silent. We can ridicule the irony of white rich kids trying to silence someone who suffered to give America real equality.

Why do I say white? Not because it matters to us, but because it does to them, as they say they are fighting for racial justice.

Google’s workforce may be famously (infamously, according to the woke) close to 40% Asian, but a perusal of the names in the petition reveals that they are overwhelming of European origin.

Also, as the Hidden Tribes Project has demonstrated, these woke views are held overwhelmingly by white elites, who—as they have now again demonstrated—will be merciless with those in the “marginalized groups” who refuse to express their ideas.

So, no, we won’t be quiet. James, as Margaret Thatcher said, “is not for turning.” Nor are we.