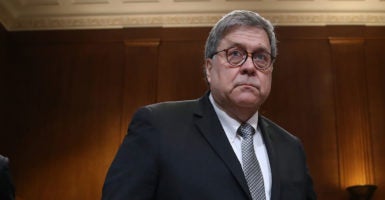 Democrats sharply attacked Attorney General William Barr for telling the truth when he acknowledged in Senate testimony Wednesday that federal law enforcement officers had spied on the Trump presidential campaign.

Schumer tweeted that Barr was “peddling conspiracy theories.” Pelosi said “I don’t trust Barr.” And Hoyer told Fox News that Barr is “acting as an employee of the president … to protect the president.

“I think spying did occur,” Barr told a Senate Appropriations Committee subcommittee. “The question is whether it was adequately predicated.”

Whether you’re a Democrat or Republican—whether you support President Donald Trump or can’t stand him—you need to accept the reality that what Barr said is true. As Barr pointed out, the spying took place by both federal informants and secret electronic surveillance authorized by the Foreign Intelligence Surveillance Act (FISA) Court.

Simply ignoring the issue of whether the spying against the Trump campaign was justified would be irresponsible and a dereliction of duty by the attorney general.

Barr has a responsibility to look into the spying, focusing on finding answers to two questions:

First, did the FBI and the Justice Department have evidence to justify opening an investigation and counterintelligence operation looking at the Trump presidential campaign?

And second, did those who authorized the spying meet the requirements of the FISA law to justify electronic surveillance?

“Spying on a political campaign is a big deal,” Barr told senators. It sure is. Everyone, regardless of their politics, should be “concerned about intelligence agencies and law enforcement agencies staying in their proper lane,” Barr said.

Dictatorships spy on political opponents, throwing them in jail or sometimes even executing them. In democracies, governments are not supposed to use their law enforcement powers and massive resources against political opponents. It is vital that we adhere to this distinction and not let Uncle Sam turn into Big Brother.

We have never before had a situation in which law enforcement officials of executive branch agencies spied on a presidential campaign. It’s something that never should happen without substantial evidence of possible wrongdoing.

You’ll recall that the purpose of special counsel Robert Mueller’s investigation was to ascertain whether members of the Trump campaign or others associated with it conspired with the Russian government in efforts to interfere with the 2016 election and elect Trump.

The Mueller investigation found no evidence of any such collusion, raising serious questions about what led to the campaign surveillance in the first place. This is why Barr told senators that he is “reviewing the conduct of the investigation” to fully understand “all of the aspects of the counterintelligence investigation that was conducted in the summer of 2016.”

Keep in mind that all of this started when the Justice Department and the FBI sought permission from the FISA Court to surveil Carter Page, who acted as a foreign policy adviser to the Trump campaign for several months. Page was never charged with, or indicted for, any violation of federal law by Mueller or the Justice Department.

The FISA Court reviews all applications made by the FBI, Justice Department, and other federal intelligence agencies seeking classified warrants that allow them to engage in electronic surveillance. The court’s proceedings are secret.

The Foreign Intelligence Surveillance Act requires federal law enforcement agencies to provide “a statement of facts and circumstances relied upon” to justify the government’s assertion that the surveillance target is “an agent of a foreign power.”

The act also requires the government to show that the “facilities or places” targeted by the electronic surveillance are being used by the “foreign power or an agent of a foreign power.” Most importantly, the application to authorize surveillance must be submitted “by a Federal officer in writing upon oath or affirmation.”

In other words, the government officials who applied for a surveillance warrant on Page had to swear that the “facts and circumstances” in the application were true.

Yet we now know from various reports, including one released by the House Intelligence Committee in 2018, that the FBI and Justice Department relied almost exclusively on the Steele dossier, a piece of fraudulent opposition research paid for by the Hillary Clinton presidential campaign.

It appears that neither the FBI nor the Justice Department bothered to check the claims in the Steele dossier. Former FBI Director James Comey admitted the claims were “salacious and unverified.”

Former FBI Deputy Director Andrew McCabe testified before Congress that no surveillance warrant involving the Trump campaign would have been sought without the dossier information.

And former FBI attorney Lisa Page admitted to Congress that the investigation was opened with a “paucity” of evidence.

There are plenty of additional details here for Barr to investigate. Were the FBI and Justice Department officials who signed the FISA applications less than forthcoming in that application? Did they mislead the FISA judges by failing to reveal that government officials were relying on unverified political opposition research?

If government law enforcement officials abused their power or misled a court, serious consequences must follow—not only to punish wrongdoing, but also to deter future misconduct by government officials.

Barr reminded senators of his “obligation to make sure government power is not abused.”

“I think that’s one of the principal roles of the attorney general,” Barr said. On this, he is absolutely right.