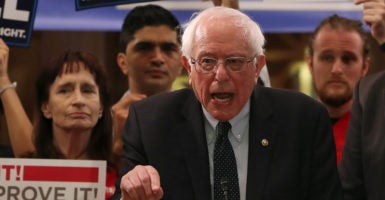 Independent Vermont Sen. Bernie Sanders, a self-described “socialist,” is doubling down on his efforts to give federal officials total control over Americans’ health care.

The senator has just unveiled the Medicare for All Act of 2019 with 13 leading Senate Democrats, including fellow contenders for the 2020 Democratic presidential nomination: Sens. Cory Booker of New Jersey, Kirsten Gillibrand of New York, Kamala Harris of California, and Elizabeth Warren of Massachusetts.

Americans should find this bill chilling. If passed, it would essentially abolish all private health coverage in America, regardless of whether Americans like their current plans.

Here are the specifics.

This bill, title by title and section by section, is almost identical in substance to the Medicare for All Act of 2017 (S.1804) introduced last Congress.

Under Title I, the bill would create a new national health insurance plan to provide universal coverage to all U.S. residents, regardless of their legal status. This new program would be phased in over a four-year period.

Under Section 107, the bill would outlaw private health coverage, including employer-sponsored coverage, that “duplicates” the coverage provided under the government health plan. Approximately 181 million Americans would lose their existing private coverage.

Like the earlier version, the new Senate bill would also abolish other federal health programs, including Medicare, Medicaid, the Children’s Health Insurance Program, Tricare, and the popular and successful Federal Employees Health Benefits Program. The tens of millions of Americans currently covered by these programs would also be involuntarily absorbed into the new government health program.

Under Title II, the bill would provide 13 categories of health benefits, including a new long-term care benefit. This is a richer benefit package than that contained in the earlier Sanders bill, which listed 10 categories of benefits. Also like the earlier bill, taxpayers would be compelled to fund abortion, and the bill would override current law that ensures conscience protections for medical professionals.

The new bill would also eliminate virtually all cost sharing, except for a limited out-of-pocket obligation for prescription drugs. This provision, of course, would induce increased demand for medical services and thus increase the overall costs of the program.

Under Title II, the bill would set forth detailed terms and conditions for the participation of doctors and other medical professionals in the government system, including the limiting conditions governing private contracts.

Under Section 303 of the new Senate bill, private contracts between doctors and patients would be discouraged. Doctors who choose to take private payment from patients outside the system would face a stiff penalty.

Under Section 303, the physician would have to sign an affidavit that he engaged in such a contract, submit it to the secretary of health and human services, and then forego all reimbursement from all other patients enrolled in the new federal entitlement for a period of one year. Few doctors, of course, would be able to do such a thing.

This is essentially the same policy embodied in the previous version of the Sanders legislation, and an even more restrictive version is embodied in the House bill (H.R. 1384).

This, along with the abolition of all insurance alternatives, would come as a striking restriction on patients’ personal liberty. Interactions with physicians are sometimes focused on highly sensitive matters, and patients might desire confidentiality and prefer not to submit a claim either to a government agency or even a private insurance company.

Then, of course, there is also the problem of getting access to specialized services. If the government plan, operating as a monopoly, does not or cannot offer you what you want or need, you would have no viable alternative under this legislation.

If the Senate bill—or some version of it, such as the House Democratic bill—were to become law, ordinary Americans could surely expect three major consequences.

With a single government health program designed as an entitlement for 327 million Americans—providing services “free” at the point of service—utilization would explode. Americans would face long waiting lists, delays, and even denials of medical care. It would be unavoidable.

The experience of “single payer” countries, like Britain and Canada, shows that waiting lists for medical treatment are common, especially for hospitalization and specialized medical services.

Today’s doctor shortage, fueled by accelerated retirements and physician burnout, would surely worsen. Beyond imposing Medicare’s huge regulatory regime and its paperwork burden on the entire nation, the Senate bill would impose Medicare payment rates (rates lower than private insurance) as the means to reduce reimbursement for all doctors, hospitals, and medical professionals. Former Medicare Trustee Charles Blahous estimates that this would translate into a stunning 40% decline in medical reimbursement.

While leftist ideologues might vigorously applaud such a radical reduction in physician payment as a major source of health care “savings,” the negative impact on patient access and quality of care would be incalculable.

Curiously, the new Senate bill, like its predecessor, has no financing provisions. Instead, as with the last version, Sanders has offered a list of financing options that could be used to pay for this massive enterprise, including a 4% income-based premium, a 7.5% payroll tax, the elimination of all tax breaks for existing health insurance, and a series of taxes on wealthy citizens.

Independent analysts have concluded that such “options” would fall far short of covering the true costs of such a program, meaning that individuals and families would pay much higher taxes than the senator’s revenue proposals anticipate. Both the liberal Urban Institute and the conservative Mercatus Center projected that the earlier version of the Sanders’ plan would cost approximately $32 trillion over 10 years.

Those earlier projections are obsolete, because the senator has now added a costly long-term care program to the bill’s mandatory benefits package.

This is not a realistic way forward. Socialism is the wrong prescription for Americans who want quality, affordable health care.