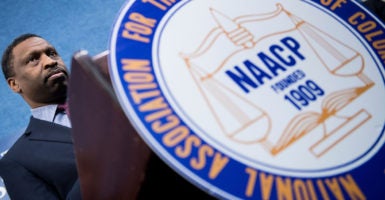 I try to keep an open mind about policies and regulations that impact communities of color. After all, the government’s No. 1 priority should be the welfare of its people.

But with interest groups now linking arms despite having little if anything to do with each other, it can be hard for the average person to discern which policies will serve them best.

For example, the National Association for the Advancement of Colored People released a new study this month called “Fossil Fueled Foolery,” which claims to reveal how the fossil fuel industry manipulates communities of color.

Yes, you heard that right.

The contradictory 28-page report criticizes the industry and even highlights its “Top 10 Fossil Fuel Industry Tactics”—but nowhere does it offer a solution to our growing energy needs. There’s also no mention of energy poverty, a real phenomenon plaguing the black community in which households can’t afford basic electric and heating needs due to high energy prices.

Those energy prices are only pushed higher by “green agenda” policies. So the very people the NAACP claims it is helping are actually the ones being negatively impacted by the energy policies it promotes.

The NAACP’s report states that “[t]he Intergovernmental Panel on Climate Change has put the world on a 12-year countdown to take urgent and aggressive action on eliminating the greenhouse gas emissions that drive climate change.” This same statement caused hysteria among environmentalists calling for drastic measures like the Green New Deal.

And despite studies and articles written about how the Green New Deal would hit minorities and black communities the hardest, many presidential hopefuls continue to embrace the plan.

In the report, the NAACP lists the “Top 10 Fossil Fuel Industry Tactics” that it claims are being used to manipulate communities of color. Yet some of these tactics are nonsensical, including the very first one, which says the fossil fuel industry “invest[s] in efforts that undermine democracy.”

The irony is that the NAACP is doing just that: investing in a study and promoting misleading information.

Another tactic listed (and the most absurd) is No. 10: “Embrace renewables, seek to control the energy economy, and quell energy sovereignty.” Come again?

The NAACP is simply trying to smear conventional energy sources in an effort to stay in with the left. But such tactics will only backfire on the people the NAACP claims to represent: low-income and black communities. We need look no further than the city of Baltimore, the national headquarters of the NAACP, where some residents pay 50% to 75% more in energy bills because of green energy policies that have fallen short.

This reflects a loss of mission on the part of the NAACP, which was founded to advance the interests of black people—not buy wholesale into one side’s energy policies.

In recent years, new organizations like Black Lives Matter have fostered a stronger presence in the black community than the NAACP. Other groups like the African American Episcopal Church Council of Bishops have called for the NAACP to reinvent itself.

Many black people, including myself, have questioned the relevance of the NAACP and its views. There is in fact more diversity of viewpoint within the black community than the NAACP lets on.

Proving this point, Rev. Clenard Childress Jr. and Alveda King—the niece of Martin Luther King Jr.—slammed the NAACP in 2017 for supporting abortion, despite the fact that abortion is the largest destroyer of black lives in America.

Even the NAACP’s name is outdated. I can’t remember ever being called “colored.” That word was removed from the U.S. census report in 1980. It’s no wonder the NAACP is struggling to stay relevant.

The truth is that the NAACP has been left behind. This “Fossil Fuel Foolery” paper shows exactly who the NAACP serves: the coalition of the liberal elite. Low-income and black Americans will have to look elsewhere for genuine representation.