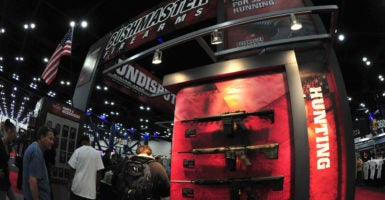 Gun manufacturer Bushmaster Firearms will appeal to the U.S. Supreme Court after a panel of Connecticut judges said nine victims of the 2012 Sandy Hook Elementary School massacre can sue the company despite a federal law shielding gun-makers from most lawsuits.

Congress extended immunity to firearms manufacturers, distributors, and trade associations in 2005 when it adopted the Protection of Lawful Commerce in Arms Act (PLCAA). The law generally protects the industry from liability when third parties use weapons for criminal purposes. It applies in both federal and state courts.

PLCAA’s prohibitions notwithstanding, the Connecticut Supreme Court said the Sandy Hook plaintiffs could proceed with their lawsuit against Bushmaster. The plaintiffs, citing advertising materials that place the XM15 in a martial context and glorify its lethal capacity, say Bushmaster violated Connecticut’s unfair trade practices law because its marketing campaign for the weapon encouraged its use for illegal purposes.

The state Supreme Court said the plaintiffs can proceed on that claim under an exception to the PLCAA that sets aside immunity if a manufacturer breaks a law “applicable to the sale or marketing of the product.” The panel returned the case to a lower court for trial. The decision stunned pro-Second Amendment groups.

University of Richmond School of Law professor Carl Tobias told The Daily Caller News Foundation that Bushmaster’s appeal to the Supreme Court may be premature.

Lawyers for Bushmaster asked the state Supreme Court to put its decision on hold Friday until the justices decide how they will proceed. In court filings, Bushmaster said the U.S. Supreme Court has previously recognized that litigation should not proceed until the immunity disputes are resolved. Bushmaster called those holdings a “common sense principle based on fairness.”

“If proceedings are not stayed and Remington is required to undergo the costly and time-consuming burdens of litigation, including further discovery, motion practice and possibly trial, it will irreparably lose the intended benefit of threshold PLCAA immunity from suit,” Bushmaster’s motion reads.

If Bushmaster’s appeal is granted, its case will be heard in the court’s next term, which begins in October. The justices are also scheduled to hear a gun rights dispute from New York City next term.