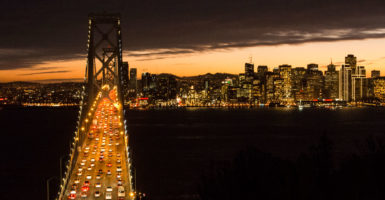 It must be humiliating for Oakland and San Francisco and their environmental allies to have their sham conspiracy stories so utterly and so publicly debunked. Pictured: The San Francisco skyline and the Oakland Bay Bridge as night falls. (Photo: Education Images/UIG/Getty Images)

They’re back, and they’re more preposterous than ever.

The lawsuits were a ridiculous bid to single out a few energy companies and hold them exclusively responsible for all of Earth’s climate change. The plaintiffs sought “billions of dollars for something that hasn’t happened yet and may never happen to the extent you’re predicting it will happen,” District Court Judge William Alsup explained.

Once San Francisco and Oakland filed suit, their conspiracy narrative about how these energy companies kept climate change knowledge “secret” was exposed as baseless. Why? Because the plaintiffs were forced to present actual evidence.

Alsup, appointed by President Bill Clinton, noted the lawsuit’s unsubstantiated blockbuster claims, among them that “there was a conspiratorial document within the defendants about how they knew good and well that global warming was right around the corner.”

Alsup later recounted: “Well, it turned out it wasn’t quite that. What it was, was a slide show …  somebody had gone to the IPCC [the United Nations’ Intergovernmental Panel on Climate Change] and was reporting on what the IPCC had reported, and that was it. Nothing more.”

Noting that the report was released internationally, Alsup said, “[I]t is hard to say [oil and gas companies] were secretly aware. … Everybody knew everything.”

The judge then turned to the plaintiffs’ lawyer and said, “If you want to respond, I’ll let you respond. Anything you want to say?”

“No,” replied the lawyer.

With that, the judge dismissed the case.

It must be deeply humiliating for the two California cities and their environmental allies to have their sham conspiracy stories so utterly and so publicly debunked.

Nevertheless, that hasn’t stopped activists from continuing to push the false narrative. In fact, they’ve taken it a step further in a new conspiracy theory that alleges that, as early as the 1970s, the federal government knew “the impact carbon dioxide emissions would have on the planet.”

Of course, it is absurd to argue that government officials of both political parties knew and that the industry knew, and yet at the same time pretend there is a secret scheme to keep the info hidden.

The two cities also aren’t suing the government for failing to act, but instead narrowly focused their legal shakedown on the energy industry, presumably due to its deep pockets.

As comical and conflicting as the conspiracy theories might be, they are not legal arguments that will be a factor in determining the outcome in these cases.

The appeal ultimately will be decided on the basis of whether Alsup was correct in his ruling that there actually was no showing of any extant conspiracy and that therefore the matter should be decided by the nation’s legislative branches rather than in a California courthouse by a single judge.

Unfortunately for the plaintiffs, the legal issue is as clear as their shakedown is transparent.

The same precedent was cited last June, when a nearly identical lawsuit filed by New York City was thrown out of court.

Once the cities lose their appeal, American consumers will win, escaping the more expensive energy and economic damage that would have resulted from the lawsuit.

Let’s be honest about what’s really going on here.

Trial lawyers are foisting these conspiracy theories on the courts in a lame effort to replicate the successful anti-tobacco litigation strategy years ago. The only problem with this strategy is there is no cover-up of harmful information, and any climate policy changes are within the purview of Washington, D.C.

If government reports and international studies discussing climate change were all part of the public domain—as has now been shown—how can these trial lawyers succeed with such baseless claims?

Mayors who are suing our energy producers in hopes of winning billions to balance their books need to look somewhere else for a bailout. These cases rightly should be tossed out of court, and those attempting to file future litigation should be called out as the hustle artists they truly are.