6 Big Topics From Senate Hearing on Censorship by Big Tech 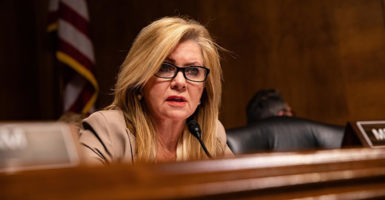 Facebook and Twitter executives testified Wednesday on Capitol Hill about their alleged political bias in the wake of numerous anecdotal instances of censorship reported by users of the social media sites.

The topic of the hearing was censorship of conservative views by big tech firms such as Facebook, Twitter, and Google.

Also speaking were the director of the new pro-life movie “Unplanned,” college professors, and the father of a child murdered during the Sandy Hook school shooting in 2012.

Here are six highlights from the hearing.

Monje stressed that Twitter “does not use political viewpoints, perspectives, or party affiliation” in making decisions about content or rankings.

“I would like to state unequivocally that Facebook does not favor one political viewpoint over another, nor does Facebook suppress conservative speech,” Potts told the Senate panel.

“Our Community Standards have been carefully designed to ensure that content is reviewed in a neutral way, focused on what is necessary to keep our users safe.”

2. Blackburn Gets an Apology

Sen. Marsha Blackburn, R-Tenn., confronted Monje, who apologized for pulling her pro-life ad during the 2018 campaign because Twitter deemed it “inflammatory.”

Seeking a yes or no answer, Blackburn asked both social media executives  whether their platforms should “promote spirited debate on all sides of the political spectrum.”

Blackburn then asked: “Should Facebook allow ads urging that we save sea turtles or baby seals?”

“I believe that would be fine,” Potts answered.

Monje: “Every ad is judged within context. We made a mistake on your ad, and I apologize.”

Monje also apologized to Blackburn during his opening remarks before the committee.

However, the executives from both California-based social media giants denied any political bias on the part of their teams or in their electronic algorithms used to filter content.

Chuck Konzelman, the writer and director of “Unplanned,” which opened two weeks ago, told the Senate panel about obstacles in marketing the movie on Google and Twitter

“Twitter apparently deleted the vast majority of those listed as ‘followers’ for our account,” Konzelman said, “reducing the number from something on the order of 200,000 to less than 200. A thousand-to-one reduction in our listed followers.”

“Interestingly, on the one social media platform from today’s first panel where we didn’t have significant problems—on Facebook—our exposure exploded,” he said. “And I believe the film’s Facebook site had something on the order of about 12 million trailer views by the time of our theatrical debut, and nearly 18 million to date.”

Monje, the Twitter executive, said the problems with the “Unplanned” account occurred because of a glitch in the automated system.

“We reinstated the @UnplannedMovie account as soon as it was brought to our attention that the new account was not intended for similar violative activity,” Monje said.

The committee disinvited Google executive Max Pappas, a former Senate aide to Cruz, because he was not at the equivalent level of the Facebook and Twitter executives.

The entire Judiciary Committee reportedly plans to conduct a separate hearing on Google, where Pappas is acting director of political and stakeholder outreach.

Blackburn noted that earlier this month, Google “shut down its AI External Ethics Board because, heaven forbid, a woman serving on the committee was the president of a respected conservative think tank.”

“For these employees in Silicon Valley, conservative credentials are absolutely a scarlet letter,” Blackburn added.

Blackburn was referring to Heritage Foundation President Kay Coles James, a member of Google’s new advisory board on artificial intelligence until company employees organized a petition against her.

Google responded by disbanding the board. James wrote an op-ed for The Washington Post about the matter in which she recalled the discrimination she experienced as a young black girl in Virginia.

Cruz said doing something about big tech censorship of conservative voices is complicated.

The Texas Republican, however, said Congress could take away the immunity big tech companies have to liability under the Communications Decency Act.

He said fraud laws might apply. Last, noting the size of the companies, he suggested that anti-trust law could apply.

The subcommittee’s ranking member, Sen. Mazie Hirono, D-Hawaii, called the charges of anti-conservative bias “baseless” and said they have been “disproven time and again.”

“For decades, Republicans have bashed the supposedly liberal mainstream media in an effort to work the refs and gain more favorable coverage,” Hirono said. “The strategy has worked. Research shows that major news outlets have overcompensated for their perceived liberal bias by treating Democrats more harshly than Republicans.”

After losing his daughter in the Sandy Hook Elementary School shooting in Newtown, Connecticut, Robert Parker faced harassment and death threats when a social media campaign commenced, claiming the massacre was a hoax.

The shooter killed 20 children and six adults at the school.

Parker said social media companies ignored his pleas to block the lies that were posted.

“Instead of simply being left to grieve in our own home, we were exposed to even more sinister people and motives,” Parker said. “Within 48 hours of my daughter’s murder, hoaxers and conspiracy theorists began spewing lies and threats about my family and me on sites like YouTube, Facebook, and other platforms.”

Professional conspiracy theorist Alex Jones is among those with the biggest platforms who claimed the shooting didn’t occur. Jones since has recanted, claiming he suffered form a form of psychosis that caused him to believe everything was staged.

Parker said friends set up a memorial page on Facebook that was inundated with “vile videos,” which forced them to shut down the page.

“In this day and age, when our opinions and thoughts can so easily be shared to the world, we all have a responsibility to ensure our freedom of speech is not trampled upon,” he said, adding:

Allowing hateful, false information to proliferate on the internet doesn’t just corrupt our national dialogue—it has real consequences for real people. I believe that social media companies have a duty to moderate content, not to limit but rather to protect the First Amendment in the way in which it was intended.