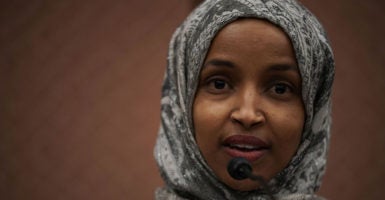 Even before the openly anti-Semitic remarks of Rep. Ilhan Omar, D-Minn., forced Congress to adopt a vague anti-hate resolution in March, the case for America’s Jews to leave the left and the Democratic Party was building. The rise of identity politics makes their run to the right and the Republicans sooner or later all but inevitable.

Identity politics puts America’s Jews in a tight spot. Often misunderstood as mere tribalism—where each group gets to be part of its own racial or ethnic tribe—identity politics is about victimhood and oppression. The people belonging to victim groups get liberation, the full celebration of their identity and political rule. The people belonging to oppressor groups are not only denied an identity—they must perpetually atone for the sins of their ancestors.

In elevating victims, identity politics creates a hierarchy of victimhood where the highest status goes to those most aggrieved. This logic—applied to Jews—was at work when House Majority Whip James Clyburn, D-S.C., defended anti-Semitic comments by Omar.

“There are people who tell me: ‘Well, my parents are Holocaust survivors,’ ‘My parents did this,’” Clyburn told The Hill newspaper. “It’s more personal with [Omar] … she is living through a lot of pain.”

Omar was born in Somalia. As a child she lived in a Kenyan refugee camp before her family immigrated to the U.S. Her victimhood is more recent, her pain more fresh, than that of the Holocaust.

And because the Holocaust ended almost 75 years ago, the vast majority of survivors are now no longer alive. Most U.S. Jews have only heard stories about the Holocaust from their parents, grandparents, and even great-grandparents—and through reading, films, and museums.

The politics of victimhood dictates that closer proximity to oppression grants higher dignity and higher political rank. The most pained should rule.

Until recently, Jews maintained a high station in the hierarchy of oppression, and largely viewed themselves as victims. According to a Pew Research survey, 73 percent of America’s Jews define themselves through the Holocaust, rather than through God or Jewish law. Having exchanged religious Judaism for victimhood Judaism, most no longer see that victimhood is contrary to the status of a chosen people whose fate is in the hands of a just and wise God.

But it’s increasingly hard for American Jews to make a compelling case that they are still a victimized group. By many measures, they have been disproportionately successful in all fields of American life.

Thirty-six of America’s 100 wealthiest people are Jews—far more than any other minority group. Jewish students and faculty disproportionately populate the nation’s best universities. The presidents of Yale, Princeton, the Massachusetts Institute of Technology, the University of Chicago, and the University of Pennsylvania are Jewish.

On a per capita basis, Jews enjoy far more success than even the alleged oppressor group.

But supporters of identity politics are increasingly viewing Jews not as a distinct victim minority but primarily as whites, thereby labeling them as part of the broader majority oppressor group.

As Black Lives Matter activist and Co-President of the 2019 Women’s March Tamika Mallory put it: “We’ve all learned a lot about how while white Jews, as white people, uphold white supremacy, ALL Jews are targeted by it.”

The executive director of Jewish Voice for Peace, Rebecca Vilkomerson, tweeted: “We white Jews especially need to recognize that centering our own status as victims here is a power move, as well as a way to avoid self-reflection on our relative status in a white supremacist world.”

In the new racial hierarchy proposed by supporters of identity politics, Jews—now classified as whites—will lose their victim status altogether and be regarded instead as beneficiaries and perpetrators of “white privilege.”

The choice is already being put to Jews: Either view yourself as part of the white majority, or serve and be governed by other victim groups who are your moral superiors and may well despise you.

Continuing to choose victimhood is a dark, imprudent road. Jews are already being written out of the history of the civil rights movement, despite their key role in this just cause. Israel is no longer viewed as a source of democracy and hope, but as a colonial power—in part because Palestinians have acquired a higher rank in the victimhood hierarchy.

Moreover, despite the outlandish promises of promoters of identity politics, Jews should remember that a genuine culture or identity cannot be created out of victimhood.

With the rise of identity politics on the left, American Jews will find themselves increasingly used and despised in those quarters. As that happens, President Donald Trump might make them notice that conservatism actually admires human excellence of the kind Jews have achieved, and warn about what awaits them on the left.

With a few exemplary defectors in the lead, this may bring major losses of human capital and money on the left, while the hospitable home of the right grows stronger.