I Was a 3-Star General. Here’s Why Efforts to Weaken Officers’ Court-Martial Authority Would Backfire. 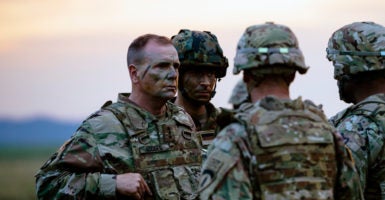 I had the privilege of serving in the United States Army for 36 years, retiring in 2016 as a lieutenant general (a three-star). I was a commanding officer three times for a total of six years.

As debate continues over how to handle sexual assaults in the military, and what role a commanding officer should play, I thought it would be helpful to share why commanding officers, such as I was, are critical to solving this problem.

Today, commanders have the authority to refer soldiers under their command to a court-martial if they believe there is probable cause that they committed a crime. But some, led by Sen. Kirsten Gillibrand, D-N.Y., and a group named “Protect Our Defenders,” are now seeking to strip commanding officers of that authority. Instead, they want that authority to be held by a military JAG who, in their judgment, would make a better decision.

This is terribly misguided. Removing accountability from us, and giving that authority to a so-called independent prosecutor, would only serve to weaken the military, its criminal justice system, and, ironically, result in fewer cases going to a court-marital.

I was trained as a warfighter, not a lawyer. But as I rose in rank, I relied on the sound judgment of Army JAGs who advised me on a wide variety of legal issues—the law of war, rules of engagement, contract law, personnel law, acquisition law, administrative law, and criminal law.

Their advice was invaluable, and provided me with information that, combined with other information and experience, helped me lead to the best of my ability.

During combat, commanders have the benefit of getting advice from a host of experts, including experts in intelligence, weather, ordnance, logistics, linguistics, law, and more.

Our military is the best-trained military in the world. Our leaders are highly intelligent, adept, and agile, and are required to operate on and off the battlefield in a complex and ever-changing environment.

Today’s successful military leaders make thousands of critical decisions each month, from the unseen to the widely known. We try to get it right all the time—though sometimes we fail, because we are human. But we exist in an ecosystem where accountability is part of our DNA, because the defense of the nation is at stake. The American people deserve no less.

The pinnacle of a military officer’s career is when he or she assumes command. As Richard Swain and Albert Pierce write in their seminal work on military leadership, “The Armed Forces Officer”:

Command is the acme of military leadership, the goal toward which officers most often aspire, and the route to the highest positions of trust in the profession of arms. Command is the authority that a commander in the armed forces lawfully exercises over subordinates by virtue of rank or assignment. Commanders at every echelon have a unique responsibility to make sense of the situation in which they find their forces and take all necessary actions to achieve their superiors’ assigned or implicit ends. Commanders are uniquely empowered to enforce their orders and those issued under their authority. They retain comprehensive responsibility for the conduct, efficiency, effectiveness, and health and welfare of all the forces entrusted to them. Though seldom mentioned explicitly today, commanders are still expected, as the 1923 Army Field Service Regulation required, ‘never [to] hesitate to exact whatever effort is necessary to attain the desired end.’

Just as the role of the commanding officer in the military is unique, the military justice system is also unique, and for good reason. It is structured in order to help the military succeed in defending the nation. Its unique structure allows commanding officers, who have court-martial authority (called “convening authority”), to carry out the orders of their civilian leaders to fight and win wars.

I was a convening authority. When personnel under my command committed serious misconduct and there was probable cause to believe they had committed a crime, I had the responsibility and legal authority to send suspected criminals to a court-martial.

Just as the role of the commanding officer in the military is unique, the military justice system is also unique, and for good reason.

Efforts by some to strip commanding officers of this ability to refer cases to a court-martial are, from my perspective, dangerous and wrongheaded. Here are four reasons why.

1. It would weaken the military overall by stripping commanding officers of the ability to enforce good order and discipline for personnel under their command.

A commanding officer in the military has a wide range of tools available to enforce good order and discipline. These tools include mild administrative remedies, such as informal counseling, formal counseling, executive officer inquiry, and non-judicial punishment under Article 15 of the Uniform Code of Military Justice.

These administrative tools allow for flexible, quick, and effective discipline to address misbehavior or lack of attention to detail by those who violate rules. They help the commander show the troops that there are consequences, immediate and swift, for poor decisions or performance and minor misdeeds.

The ultimate administrative remedy is the ability to “fire” a service member for misconduct. The power to send a soldier, sailor, airman, or Marine to an Administrative Discharge Board (referred to as an “Admin Board” in the military) sends a clear message to all those who serve under the commanding officer: There will be consequences for misconduct or neglect of duty.

The ultimate remedy for any commanding officer is the power to refer a suspected criminal in their unit to a court-martial. Taking that power away from commanding officers eliminates an indispensable authority that cannot be delegated or transferred to another—at least not if we are to demand accountability from commanders for prosecuting and preventing sexual assaults and other serious crimes.

Strip commanders of the ability to refer cases to a court-martial, and you send a loud and clear message to troops under her command that she does not really command them, in the full sense of the word.

The convening authority has a role that cannot be reduced to either a prosecutor nor judge. This authority assigns military personnel to be members of a court-martial, decides on the charges to be filed, decides whether to use non-judicial punishment or an administrative proceeding in lieu of a trial, approves or rejects requests for expert witnesses, and accepts plea agreements.

In contrast, civilian prosecutors decide only whom to investigate, whom to charge, and what to charge. The reason for the difference is that civilian prosecutors are not responsible for the defendant’s training, good order, and discipline in the way that a military commander is. Strip commanders of the ability to refer cases to a court-martial, and you send a loud and clear message to troops under her command that she does not really command them, in the full sense of the word.

3. If commanders are stripped of convening authority, fewer cases would go to a court-martial, including sexual assault cases.

As a non-lawyer and convening authority, I was not bound by the ethics rules that all lawyers are required to follow. When I believed that there was probable cause that one of my subordinates committed a crime under the Uniform Code of Military Justice, I could refer that soldier to a court-martial. And I did several times in my career. Why? To hold them accountable for their suspected criminal misconduct.

If commanders are stripped of convening authority, fewer cases would go to a court-martial, including sexual assault cases.

Whether the prosecutor proved the case beyond a reasonable doubt was beside the point. I had a duty to enforce good order and discipline. Sending a soldier to a court-martial when he was suspected of a crime sent a loud and clear message to my troops that I was in command, and that I would not tolerate misconduct in my ranks.

The charges against a soldier were brought, almost exclusively, by military prosecutors. But I, and I alone, was responsible for making the decision of sending that soldier to a court-martial and enforcing good order and discipline.

4. The number of sexual assault cases getting prosecuted would go down, not up.

If Gillibrand’s proposal became law, then military prosecutors alone would decide whether or not to prosecute personnel under my command. And because military JAG prosecutors are lawyers, they must abide by the ethics rules under their state bar and the special ethics rules applicable to federal prosecutors. They cannot prosecute cases, like I could, where there is mere probable cause (the lowest standard of proof in the law) to believe that a soldier committed a criminal offense.

Prosecutors, military or civilian, can only charge people with a crime if they have a “reasonable likelihood of success on the merits.” The American Bar Association’s rule regarding the standards for prosecutors (Standard 3-4.3) states that a prosecutor cannot file charges unless the prosecutor believes the charges are supported by probable cause (the only standard for commanders), and that the evidence “will be sufficient to support a conviction beyond a reasonable doubt, and that the decision to charge is in the interests of justice.”

There are, undoubtedly, thousands of cases that can be brought under a “probable cause” standard, but cannot be pursued under a “reasonable doubt” standard. Sexual assault cases are difficult enough to investigate and prove in court.

If commanders are stripped of their authority to send sexual assault cases to court-martial under a probable cause standard, then far fewer cases can, or will, be sent by lawyers, who must abide by the much higher standard.

Sexual assault is a cancer that destroys military units and individuals. It is intolerable in the military. Every commander has the responsibility to create an atmosphere of trust and respect in their unit, and to hold those accountable to meet that standard.

Placing that responsibility in the hands of lawyers, while appearing to be an easy solution, would directly weaken the ability of military commanders to rid their units of sexual assault.