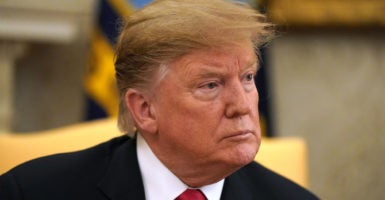 House Majority Leader Steny Hoyer, D-Md., is coming out guns blazing against what he calls the Trump administration’s “sabotage” of Obamacare.

Hoyer recently declared, “The Trump administration’s ongoing effort to take health care coverage away from millions of Americans and take critical protections away from millions more through sabotage and lawsuits is reprehensible.”

The majority leader is backing a House resolution condemning said sabotage, while the House Energy and Commerce Committee is finishing up a series of legislative measures to roll back the Trump administration’s “ongoing sabotage” of the Affordable Care Act, including its expansion of “junk plans” as alternatives to Obamacare plans.

The liberal congressional agenda is exactly the opposite: a policy of subtraction. Personal health care needs or preferences are deemed irrelevant and to be made illegal. Instead, they insist that federal officials should have veto power over any health insurance alternatives, and that they alone should exercise absolute control over the kinds of health plans, benefits, and medical treatments and procedures that Americans can have.

Recall that President Barack Obama repeatedly promised, among other things, that Obamacare would lower health costs for individuals and families, expand personal choice and competition, and allow Americans to keep their health plans and doctors.

As far as “sabotage,” the record is clear: Obamacare sabotaged Obamacare.

Over the last four years, Obamacare delivered soaring health insurance premium costs in the exchanges (jumping 105% between 2013 and 2017 alone); many thousands of dollars in individual and family deductibles; a collapse of choice and competition in the individual insurance markets; a flattening and declining exchange enrollment; and a progressive reduction in patients’ choice of physicians and medical facilities. Today, 72% of Obamacare plans have narrow provider networks.

Liberals in Congress have shown that they know how to jack up spending, increase regulation, and expand Medicaid, while presiding over the wreckage of America’s individual and small group insurance markets. During the Medicaid expansion between 2013 and 2017, the number of unsubsidized persons in the individual insurance markets actually shrunk by a stunning 4.1 million.

On health coverage, a key data point is this: Obama, deploying numerous “navigators” and armed with increasingly tough individual mandate penalties, presided over a decline in coverage in the individual health insurance markets. In fact, 2015 was the high-water mark of Obamacare enrollment. Between 2015 and 2016, according to government actuaries, 10 states experienced declining individual market enrollment, and from 2016 to 2017, 44 states experienced declining enrollment.

The biggest declines were among middle-class individuals and families who were ineligible for taxpayer subsidies while facing major premium increases. Trump cannot be blamed.

For taking modest steps to expand Americans’ choice of affordable coverage, however, Trump is “guilty” as charged. In the area of health insurance, his two major administrative initiatives are expansion of association health plans and short-term limited duration health plans.

Under rules set by the Department of Labor, association health plans would allow employers and employees in the “same line of business” to join together and unite in common pools to purchase more affordable and flexible coverage. These plans could reverse the slide in coverage for small businesses and expand the number of workers who would qualify for generous  tax relief for employer coverage.

The preliminary evidence on association health plans is positive. For example, Modern Healthcare magazine reported that the Nebraska Farm Bureau plan is offering premiums about 25% less than the Obamacare plan, while the Nebraska Chamber of Commerce HMO plans are offering premiums that are 15 to 20% cheaper premiums. “Modern Healthcare” reports that these plans are offering broad networks of providers and fairly comprehensive benefits packages, and are neither denying coverage for people with pre-existing conditions nor are they rating persons according to their health risk.

The Trump administration is also allowing people enrolled in short-term, limited-duration health plans to renew their coverage for up to three years. Under current federal law, these plans are subject to state regulation, meaning that liberal states can hobble or even ban them altogether.

These short-term plans were never designed to be a permanent solution to the individual health insurance markets’ many problems. They were created to help people who suffered a temporary lapse in coverage between jobs, who did not have a choice of affordable coverage in Obamacare’s increasingly noncompetitive exchanges, or lost access to an adequate  network of providers in Obamacare plans.

While these short-term plans provide less comprehensive health insurance coverage, they also have broader provider networks. Health and Human Services Secretary Alex Azar estimates that their premium costs can be 50 to 80% less than Obamacare plans.

Once again, the preliminary evidence is positive. According to a February 2019 eHealth survey of short-term plan enrollees, 61% said that affordability of premiums was the main reason they chose these plans. A total of 80% said they value affordable premiums over comprehensive benefits, while only 20% favor comprehensive benefits over affordable premiums. Finally, 43% said that without these plans, they would be uninsured.

The president knows the comprehensive reform of health care is a big, complex, and demanding legislative task. His modest administrative initiatives offer limited health coverage alternatives. Taken altogether, Americans will reap benefits totaling $453 billion from these changes over the next 10 years, according to the president’s Council of Economic Advisers.

This article has been updated to clarify that Majority Leader Steny Hoyer, D-Md., is not lead sponsor of the House resolution.