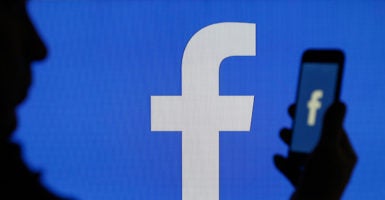 “For each of the content policy decisions we make," a Facebook spokesman tells The Daily Signal, "we engage with dozens of outside groups from across the political spectrum." (Photo illustration: Chesnot/Getty Images)

Leading technology and social media companies that have partnered with the Southern Poverty Law Center either are distancing themselves from the controversial organization or declining to comment about their relationship with the nonprofit in light of a recent shake-up at the top.

Of five tech giants contacted by The Daily Signal regarding their ties, only Facebook and Twitter responded.

Morris Dees, a lawyer who co-founded the Alabama-based Southern Poverty Law Center in 1971, was dismissed last month amid allegations of sexual harassment and racial discrimination.

Then, Richard Cohen, president of SPLC since 2003, announced that he would step down, citing “recent events.”

“Whatever problems exist at the SPLC happened on my watch, so I take responsibility for them,” Cohen wrote in an email to staff, The New York Times reported.

Social media juggernauts Facebook and Twitter and tech giants Google (which owns YouTube) and Amazon (which owns Audible and IMDB.com) are among major players that have partnered with SPLC to root out “hate speech” on their platforms, according to media reports. Apple also has strong ties to SPLC.

The Daily Signal sent inquiries last Wednesday to Facebook, Twitter, Google, Amazon, and Apple, asking each company whether it had changed policy regarding SPLC or intended to continue partnering with the litigation organization. The Daily Signal also asked each company whether it intended to revisit previous decisions it made based on guidance from SPLC.

Amazon, Apple, and Google had yet to respond at publication time.

“The SPLC is not a member of Twitter’s Trust and Safety Council or a partner the company has partnered with recently,” a person familiar with Twitter’s policy told The Daily Signal in an email, requesting anonymity.

Those listed include some well-known liberal groups such as the Anti-Defamation League and GLAAD, but none as well known for being a conservative organization.

Facebook solicits input on its policy decisions from a range of outside groups, a spokesman told The Daily Signal in an email.

“We don’t rely on any one outside group in the development of our policies,” the Facebook spokesman said. “For each of the content policy decisions we make, we engage with dozens of outside groups from across the political spectrum.”

SPLC gained national attention in the 1980s for securing legal victories against the Ku Klux Klan, the white supremacist group initially formed by Confederate soldiers after the Civil War.

Over time, though, SPLC attracted increasing criticism from across the political spectrum for controversial methods that resulted in its labeling mainstream conservative organizations as “hate groups,” according to Influence Watch, a project of the Washington-based Capital Research Center.

Tim Cook, Apple’s CEO, sent an email in August 2017 to employees that said the corporation would accept donations to SPLC and would donate $1 million itself.

Apple, which also set up a donations app for SPLC, said it acted in response to the protests and riots that erupted that month in Charlottesville, Virginia, centered on the future of Confederate statues in the city.

Conservative critics of Southern Poverty Law Center, however, do not share its left-of-center policy stance on a range of issues and see SPLC as unfairly maligning individuals and groups it disagrees with, using its “Hate Map” and other online tools.

The SPLC uses its former credibility to smear its political foes; despite this, SPLC is cited by left-leaning mainstream media outlets as a credible source for information about the mainstream right, to widespread criticism.

Influence Watch notes that Southern Poverty Law Center has acknowledged it has ignored instances of left-wing extremism and violence.

The group maintains “an undisclosed amount of money in offshore bank accounts in the tax-sheltered U.K. territories of the Cayman Islands and Bermuda,” Influence Watch adds, and does fundraising in Africa, South America, Asia, South Asia, the Middle East, Iceland, Greenland, Europe, Central America, and the Caribbean.

The Daily Signal sent an inquiry Monday to SPLC, asking whether the organization would like to comment on the allegations and its relationship with tech companies. At publication time, SPLC had not responded.