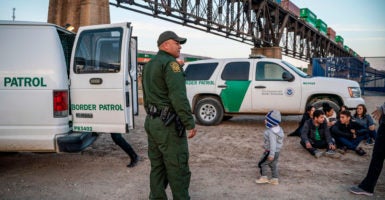 Crisis-level flows of Central American migrants to the U.S. has the White House raising questions about the effectiveness of foreign assistance to the region and potentially suspending foreign aid payments to El Salvador, Guatemala, and Honduras.

The facts and numbers clearly demonstrate that there is an emergency at the southern border.

In February, border officials apprehended a record 76,103 people, the highest number ever over the last five years. Human smugglers have learned to use children to exploit U.S. immigration law. Of the February apprehensions, 47 percent (or 40,325) were family units with children. This represents a 67 percent increase from January.

As a result, U.S. immigration courts are backlogged. The average wait time for a hearing is now 736 days, up from 718 days in 2018. For perspective, just 10 years ago the average waiting time was 364 days.

Contributing to this is this new phenomenon of large-scale caravans, orchestrated by activists groups. During my field research, caravan organizers like Pueblo Sin Fronteras told me they would act as intermediaries between the caravans and local governments, essentially coercing them and civil society groups into providing resources to the migrants. This has become a significant financial burden on the Mexican government.

Recent statements from Mexico’s interior minister, Olga Sánchez Cordero, have reinforced these findings. She directly named Pueblo Sin Fronteras as a group that is promoting and organizing these destabilizing caravans.

The fastest-growing number of illegal immigrants at the border are from the crime-ravaged and economically depressed northern triangle countries of Central America—El Salvador, Guatemala, and Honduras. Transnational criminal organizations and violent gangs have wreaked havoc on these developing nations. In this region, border security is weak, murder and corruption are high, and the government’s ability to address these problems is less than desirable.

Fixing the border crisis requires a series of policy fixes. Recent agreements in which the Mexican government committed to hold asylum applicants in Mexican territory slightly relieve the pressure, but more action is needed.

At the same time, it is imperative that the U.S. improve cooperation with Central American partners. Foreign aid should never amount to philanthropic handouts or aimless feel-good programs. Funds should be strategically allocated to further U.S. foreign policy and national security objectives.

As recommended in previous Heritage Foundation research, members of Congress should use this opportunity to review the efficacy of U.S. foreign assistance to Central America. They should ask whether U.S. efforts are working to improve Central America’s border security capacity.

Congress should also request impact reports from implementing agencies to gauge whether the programs are meeting their intended objectives. Congress should exercise its oversight authority and request information from donor agencies on how much funding actually arrives in each country.

Progress takes time, and getting U.S.-Central America cooperation right is critical for the U.S. The U.S. has a strong partner in Honduran President Juan Orlando Hernandez, and the soon-to-be president of El Salvador, Nayib Bukele, has pledged to reverse a decade of soured relations with the U.S. In addition, continued U.S. engagement in Guatemala will help develop sound anti-corruption efforts in that country.

The border crisis demonstrates that geography defines our most pressing needs. U.S. security is directly linked to the stability of Central America. We have a national security interest in deepening cooperation with our contiguous neighbors.