How Medicare for All Would Insert Government in Doctor-Patient Relationship 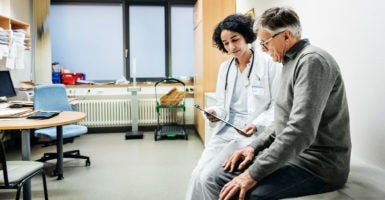 The leading Medicare for All bills in Congress would severely restrict Americans’ right to spend their own money to pay a doctor for legal medical services outside of the government’s health care system. (Photo: Tom Werner/Getty Images)

“That’s between you and your doctor.” It’s a sentiment based on the principle of doctor-patient confidentiality, a principle highly valued by most Americans.

If “Medicare for All” becomes law, however, that relationship will have to make room for a third party: Uncle Sam. And Uncle Sam will call the shots.

That’s because the leading Medicare for All bills in Congress (H.R. 1384 and S. 1804) would severely restrict Americans’ right to spend their own money to pay a doctor for legal medical services outside of the government’s health care system.

American doctors would be beholden to government officials, not patients, for the terms and conditions of their medical practice. They would depend almost exclusively on government for their livelihood.

Medical needs and preferences, however, vary from one person to the next. A person might prefer medical treatment outside of the government system. Some might want to pay their doctors directly for privacy reasons, or because they trust a particular physician, or some other personal reason.

But under Medicare for All, good luck with that.

What if a doctor “participates” in the government system? The House bill provides: “An institutional or individual provider with an agreement in effect under Section 301 may not bill or enter into any private contract with any individual eligible for benefits under the Act for any item or service that is a benefit under this Act.”

Well, what about “noncovered” medical services, where not one red cent of government money is involved? One might assume that a “participating” doctor and a patient entering into a private contractual relationship behind closed doors wouldn’t be the government’s concern.

Moreover, any doctor contracting privately with a patient for noncovered services must sign an affidavit to that effect, and file it with the secretary of health and human services within 10 days of the contract.

The House bill would ensure that federal officials know about these private doctor-patient agreements. It is irrelevant that the agreement would be for services privately paid for and privately delivered, and not provided by the government.

What about “nonparticipating” doctors—that is, doctors who have not signed an agreement to participate in the government system? They would get a limited “pass”—as long as any private contract with any patient is for a benefit or service not covered by the government. Given the universal scope of government supervision and control, this would be a tiny class of doctors delivering a small number of services. No serious alternative to the system.

If, however, a nonparticipating doctor wanted to contract privately with a patient enrolled in the government system for a service “covered” by the government, then the House bill prescribes detailed terms and conditions.

Section 303 specifies that such a private contract must be in writing, signed by the parties, entered into outside of an “emergency situation”; and the patient must acknowledge that the government is not going to pay for these services or cap their costs. The nonparticipating doctor must then file an affidavit that he or she entered into such a private contract, and file it with the HHS secretary within 10 days of the contractual agreement.

That affidavit contains a poison pill for nonparticipating physicians. It stipulates that they ” … will not submit any claim for any covered item or service provided to any individual enrolled under this Act during the 2-year period beginning on the date the affidavit is signed.”

In short, the doctor could not participate in the government system for two full years, or treat any other patient getting the government’s “free care.”

The House bill provides more than seven pages of legislative text restricting the right of doctors and patients to enter into private agreements for medical services.

The Senate bill embodies roughly the same policy. Doctors and patients could privately contract outside of the government system, but only if the doctor submits the required affidavit to the HHS secretary and agrees to forego government payments for all other patients for one year. Few doctors could do it.

Under leading Medicare for All bills, then, you could no longer spend your own money to get the personalized or confidential care you want from a doctor of your choice, except under tight legal restrictions. It makes such an option virtually impossible. If your doctor likes you, he probably can’t keep you.