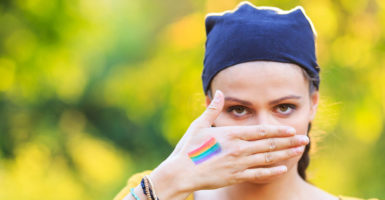 The Equality Act, a priority for House Speaker Nancy Pelosi, would add sexual orientation and gender identity to the characteristics protected from discrimination under the 1964 Civil Rights Act. (Photo: valentinrussanov/Getty Images)

Supporters of House Democrats’ “gender equality” bill testified Tuesday that the legislation is necessary to guarantee equal rights for Americans who identify as transgender.

One Republican lawmaker, however, wondered if Democrats would push the bill if President Donald Trump decided to call himself “the first female president.”

The Equality Act, introduced March 13 and a priority for House Speaker Nancy Pelosi, would add sexual orientation and gender identity to the characteristics protected from discrimination under the 1964 Civil Rights Act.

According to an explainer from The Heritage Foundation, the legislation would force workers “to conform to new sexual norms or else lose their businesses and jobs” and also compromise the work of charities and volunteers.

It also would coerce medical professionals into facilitating procedures that violate their conscience rights, the leading conservative think tank said, and hurt women by “dismantling sex-specific facilities, sports, and other female-only spaces.”

Here are five key moments from the hearing, held by the House Judiciary Committee.

Rep. Matt Gaetz, R-Fla., said he supports transgender rights, but can’t support the Equality Act as written because it “would only nominally protect certain individuals while causing tremendous harm to others.”

The bill also would allow people to take advantage of the gender lebel, Gaetz said.

“I strongly support the rights of transgender individuals,” he said. “I will not denigrate or deny their struggles. But I am concerned about the potential bad actors who would exploit the provisions for their own gain.”

The Florida Republican raised some eyebrows by asking his colleagues: “If President Trump were to say, ‘I’m now the first female president,’ who would celebrate that?”

Sunu Chandy, legal director for the National Women’s Law Center, said the legislation is necessary so that those who identify as transgender can be on equal footing with the rest of society.

“Support of the Equality Act is key to the National Women’s Law Center mission, and critical for our collective liberation against sex discrimination,” Chandy said, adding:

As a woman, a person of color, and a parent in a two-mommy family, I need the Equality Act,  and as a daughter of a Christian minister and school teacher, immigrants from a small village in Kerala, India, it has been quite a journey towards family acceptance.

Biology isn’t the only factor in determining a person’s sex, Chandy also testified.

“In terms of the biology piece, biology is made up by so many different things, as I understand, it’s not just external sex or the hormones,” Chandy said, intimating that biology isn’t the one and only factor that determines a person’s gender.

“So all of these things would make for a person,” Chandy said. “So transgender women and girls are women, and girls [who] transition into men are always our men as well.”

Kenji Yoshino, a professor of constitutional law at New York University School of Law, said he and his husband need the Equality Act to feel safe. The same-sex couple has a son and a daughter.

“Despite all the forms of privilege we possess as a family, we still feel unsafe traveling to certain areas of this country even in our home state of New York,” Yoshino said.

“We have experienced acts of exclusion and bias. In those moments, I worry less about myself and more [for] my young children. As Dr. [Martin Luther] King did for his own 6-year-old daughter when she faced discrimination … I fear seeing the ominous clouds of inferiority began to form in their little mental skies. So it is no small matter.”

“Let me tell you what happens if H.R. 5 passes,” Beck said, referring to the number of the House legislation.

“Male rapists will go to women’s prisons and will likely assault female inmates, this has already happened in the U.K.,” she said, adding:

Female survivors of rape will be unable to contest male presence in shelters; men will dominate women’s sports; girls who would have taken first place will be denied scholastic opportunity; women who use male pronouns to talk about men may be arrested, fined, and banned from social media platforms; girls will stay home from school when they have their periods to avoid harassment by boys in mixed-sex toilets; girls and women will no longer have a right to ask for female medical staff or intimate care providers, including elderly or disabled women, who are at serious risk for sexual abuse.

Beck recently participated in The Heritage Foundation’s panel discussion on the bill, “The Inequality of the Equality Act: Concerns from the Left.”

Chandy of the National Women’s Law Center also testified that  “there’s no research to support the claim that allowing trans athletes to play on teams that fit their gender identity will create a competitive imbalance.”

She said “trans children display the same variation in size, strength, and athletic ability as other youth.”

But Doriane Lambelet Coleman, a professor at Duke Law School, said she believes women will be at a disadvantage on sports teams if the legislation goes through.

“If U.S. law changes and we can no longer distinguish females from women with testes for any purpose, we risk not knowing the next Sanya Richards-Ross or the next Allyson Felix,” Coleman said, referring to two track and field greats.

“We risk losing the extraordinary value that comes from having women like [tennis player] Serena Williams, [gymnast] Aly Raisman … in our lives and on the medal stand,” Coleman said, adding:

If they bother to compete, they would be relegated to participants in the game. One prominent trans activist has said that we shouldn’t be concerned that the victories would belong to trans girls or women going forward, because what matters is their liberty to identify and their right to be treated equally throughout society.