Pro-Life Movie ‘Unplanned’ Opens at No. 4 at Box Office 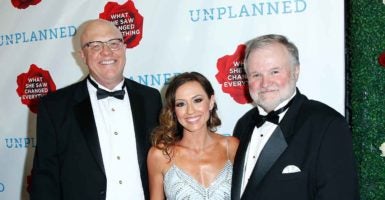 "Unplanned" star Ashley Bratcher is flanked by writer-directors Cary Solomon, right, and Chuck Konzelman on the red carpet during the premiere of "Unplanned" on March 18 in Hollywood. (Photo: Maury Phillips/Getty Images for Unplanned Movie LLC)

A movie about Abby Johnson, the former Planned Parenthood clinic director who became a pro-life activist, overcame a lack of advertising venues to become the No. 4 film at the U.S. box office during its opening weekend.

“Unplanned,” which took in an estimated $6.4 million, according to Box Office Mojo, tells the true story of Johnson, who moved up at Planned Parenthood but changed her mind about abortion after witnessing the procedure performed during the 13th week of a pregnancy.

“We are thrilled, gratified, and humbled,” writer-directors Chuck Konzelman and Cary Solomon said in a press release. “We are so pleased that the American people have responded with such an enormous outpouring of support at the box office. It humbles us and we look forward to seeing what happens in the weeks ahead.”

This is the third time Konzelman and Solomon have distributed a movie through Pure Flix, a Christian-focused production and distribution company that also handled their movies “God’s Not Dead” and “God’s Not Dead 2.”

Mike Lindell, the inventor of the popular My Pillow, helped finance “Unplanned.”

“Unplanned” also faced obstacles such as an R rating, a short ban on Twitter, and other marketing roadblocks.

Twitter restored the “Unplanned” account Saturday about an hour after several users made screenshots of the suspension notice and tagged Twitter and the social media site’s co-founder, Jack Dorsey.

“We are very happy for the success of this film,” Pure Flix CEO Michael Scott said in the press release, noting that the box office performance “shows how the topic of abortion is so important to bring to audiences.”

“We hope that those on both sides of the debate will see ‘Unplanned’ and begin to have their own dialogue,” Scott said. “This film can be that spark to bring more hearts and minds to understanding the value of life.”