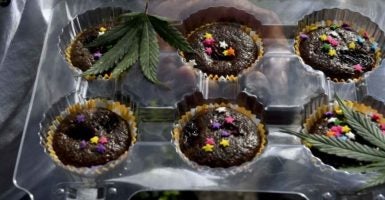 “There’s a much higher risk with taking edible agents,” University of Colorado researcher Andrew Monte says. Pictured: A man offered these marijuana brownies in a demonstration in 2016 outside the Mexican Senate building in Mexico City. (Photo: Yuri Cortez/AFP/Getty Images)

A toxicology specialist has found a connection between legalized marijuana and a threefold increase in related visits to emergency rooms in Colorado for heart and other issues, confirming that cannabis poses health risks.

Marijuana may be a recreational activity for many, but marijuana-infused “edibles” in particular have been subject to scrutiny because of their ties to a jump in patients seeking medical treatment.

The new study from researchers with the University of Colorado School of Medicine found that marijuana-related ER visits tripled between 2012 and 2016.

The study also found that people consuming marijuana edibles suffer from toxic reactions at higher rates than those who simply smoke the drug. These edibles typically include brownies and other baked goods.

Dr. Andrew Monte, an associate professor at the medical school’s Anschutz campus, was lead author of the research paper published Tuesday in the Annals of Internal Medicine, touted as the first study to show an increased rate of adverse health events linked to marijuana edibles.

“Some patients will have psychosis, hallucinations, or they will hear things,” Monte, also an emergency medicine and toxicology specialist at UCHealth University of Colorado Hospital, told the website UCHealth. “The more common thing is acute anxiety, panic attacks, and very high heart rates.”

“There’s a much higher risk with taking edible agents,” he added. “It’s so unpredictable in terms of the effects.”

Colorado legalized medical marijuana shops in 2009, then legalized recreational marijuana use in 2014. Since the legalization of marijuana in some jurisdictions across the U.S., public health experts have called for better quality control of marijuana.

ER visits by those consuming marijuana edibles have risen since Colorado legalized marijuana use, for both cardiac and psychiatric problems, the study found.

From 2012 to 2016, the study found, a total of 10,000 ER visits were tied to patients who previously smoked marijuana or used edibles.

More than 25 percent of the ER visits involved symptoms related to marijuana use. Visits related to toxic reactions from marijuana edibles were 33 times higher than expected, the study found.

Another finding: Marijuana users often suffered from nausea and vomiting, a condition known as cannabinoid hyperemesis.

Although sales of edibles make up a small share of Colorado’s marijuana market, the number of patients suffering from toxic side effects was found to be 11 percent.

Edible marijuana products also were tied to unpleasant psychiatric symptoms and, though rarely, death, according to the study. It also found that marijuana users who sought treatment generally were younger and male.

“When people take something to get high, they generally don’t want to get high three hours later and be high for 12 hours,” Monte told UCHealth, referring to the potency of some edibles.

Enjoying pot-infused edibles “isn’t completely safe,” Monte said, but it’s hard to pinpoint all the side effects because of a lack of clinical trials.