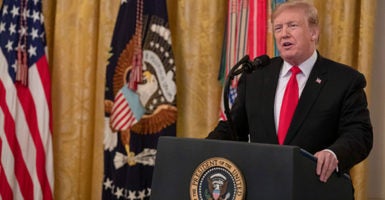 President Donald Trump said Wednesday a replacement for the Affordable Care Act would be ready if the Supreme Court rules it unconstitutional. (Photo: Tasos Katopodis/Getty Images)

President Donald Trump on Wednesday predicted the demise of Obamacare and that Republicans would become “the party of great health care.”

Trump spoke to reporters in the Oval Office two days after his Justice Department opted not to defend the Affordable Care Act—better known as Obamacare—with an appeal after a federal judge in Texas ruled it unconstitutional in December.

That ruling stemmed from a lawsuit brought by 20 states’ attorneys general who argued that Obamacare’s individual mandate was the only provision that sustained the law’s constitutionality, but that the mandate was scrapped in the 2017 tax reform bill.

Trump said getting rid of the individual mandate was a popular move.

“All over this country, they thank me,” the president said. “They don’t have to pay a vast amount of money to have bad health care. So, we got rid of the individual mandate, that was a big thing.”

Trump said the next step is replacing Obamacare with a better health care plan.

“You watch, we are going to be the party of great health care,” he said. “The Democrats have let you down. They’ve really let you down. Obamacare doesn’t work. It’s too expensive. Everything with deductibles, it’s a disaster. It’s a disaster for our people. … So, we’re coming up with plans.”