The Valor of Travis Atkins, Newest Recipient of the Medal of Honor 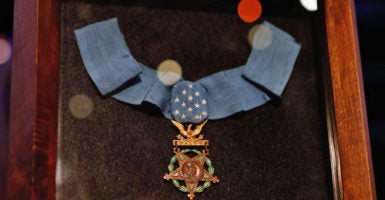 President Donald Trump will award the Medal of Honor to Army Staff Sgt. Travis Atkins, whose act of bravery in 2007 cost him his life. (Photo: Tyler Kaufman / Stringer/Getty Images)

Shane McCrum is a member of the Young Leaders Program at The Heritage Foundation.

Monday was National Medal of Honor Day, and on Wednesday, another gallant American will be awarded the nation’s highest military commendation.

Americans should be grateful for the extraordinary service of the 3,500 military service members who have received that honor—as well as all others who have fought in defense of the United States.

The Medal of Honor was created in July 1862 when President Abraham Lincoln signed legislation creating a medal for “gallantry in action and other soldier-like qualities.” The medal was later modified to include the requirement that the actions cited be “above and beyond the call of duty.”

National Medal of Honor Day came two days before the White House plans to award an Iraq war hero, Army Staff Sgt. Travis Atkins, the Medal of Honor posthumously for his act of bravery in 2007 that cost him his life.

Atkins, a squad leader in the 10th Mountain Division, is credited for saving the lives of three fellow soldiers.

Atkins was initially honored with the second-highest medal our nation presents, the Distinguished Service Cross. However, on March 12, the White House announced the upgrade to the Medal of Honor “for conspicuous gallantry.”

The Medal of Honor will be presented to Atkins’ family in a White House ceremony on Wednesday.

Atkins lost his life when he shielded three of his squad members from a bomb blast. He was later described by a friend and fellow soldier, Sgt. Aaron Hall, as “a leader in the truest sense of the word.”

At age 24, Atkins had enlisted in the Army in November 2000 and became an infantry team leader during the invasion of Iraq in 2003.

He then left the Army, only to re-enlist two years later in 2005. His father, Jack Atkins, was later quoted as saying, “The civilian life just didn’t do it for him.”

By 2007, Atkins was back in Iraq on what would be his final deployment. On June 1, 2007, he was on a route-clearance mission in the town of Abu Samak. Atkins, the truck commander, noticed two suspicious men at a crossing point and directed the Humvee to pull over to question the men.

When one man attempted to detonate a suicide vest he had concealed under his shirt, “Atkins then grabbed the suicide bomber from behind with a bear hug and slammed him onto the ground, away from his soldiers. As he pinned the insurgent to the ground, the bomb detonated,” according to the Army News Service.

As a result of Atkins’ selfless action, three soldiers were saved from the blast. The surviving soldiers were able to shoot and kill the other assailant, preventing the detonation of a second suicide vest.

Atkins is survived by his parents, Jack and Elaine, and his son Trevor, who are set to receive the honor on his behalf.

Atkins’ sacrifice is being remembered in other ways, as well. In addition to receiving the Medal of Honor, the Atkins Functional Fitness Facility was named after him at his main base at Fort Drum, New York.

Hundreds of thousands have lost their lives defending America. On National Medal of Honor Day, we remember those valiant few who, like Atkins, went above and beyond in the defense of our freedom.