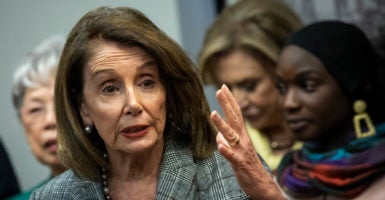 “When you can’t win the game, change the rules.”

That seems to be the motto of the far left these days. Not content to play by the rules, it hopes to tilt the playing field to its own advantage and in the process transform American politics.

Here are four ways it has proposed doing that.

A number of Democratic presidential hopefuls have floated the idea of adding new seats on the Supreme Court.

To begin with, this is something the Constitution gives Congress the power to determine. But this isn’t the first time the political branches have played politics with the Supreme Court by trying to tinker with the number of seats.

Congress initially set the number at six justices (including the chief justice) when it passed the Judiciary Act of 1789. Then, in the waning days of President John Adams’ presidency, the Federalist-controlled Congress passed the Judiciary Act of 1801, known as the “Midnight Judges Act,” which reduced the number of Supreme Court justices to five and created a number of new circuit court judgeships to be filled by Adams before his rival, Thomas Jefferson, took office.

For the next 60 years, Congress periodically added new seats, and the Supreme Court reached its high-water mark with 10 justices in 1863. Following the Civil War, Congress reduced the number of seats to seven amid its battle with President Andrew Johnson over Reconstruction. Then in 1869, Congress set the number of justices at nine, where it has remained since.

The last major attempt to alter the Supreme Court’s composition was in the late 1930s. President Franklin Delano Roosevelt, upset with the conservative “Four Horsemen” of the Supreme Court thwarting parts of his New Deal agenda, tried to persuade Congress to allow him to appoint a “junior justice” for every sitting justice who remained on the Supreme Court beyond age 70.

That measure failed in the Democrat-controlled Senate. But Roosevelt got the last laugh—he got to “pack” the court the old-fashioned way, and ended up appointing eight justices throughout his time in office.

So while it’s not unprecedented to alter the number of seats on the Supreme Court, proponents of “court packing” should explain why they want to do so and what kind of justices they would appoint.

Odds are, they would favor activist judges who don’t understand the proper, limited role the judiciary is supposed to play in our government. That would end up compounding the problem of an activist Supreme Court that inserts itself into matters that should be handled at the ballot box and in Congress or statehouses across the country.

The movement to grant statehood to Washington, D.C., is picking up steam with Democrats in Congress. The House of Representatives recently passed H.R. 1, a partisan laundry list of voting-related matters, which included a statement of support for D.C.’s statehood effort.

But there are good reasons why the District of Columbia should not be made into a state.

The Founders settled on placing our nation’s capital in a federal city that would not be unduly influenced by a state government. As James Madison explained in Federalist No. 43, “dependence of the members of the general government, on the state comprehending the seat of government, for protection in the exercise of their duty, might bring on the national councils an imputation of awe or influence, equally dishonorable to the government and dissatisfactory to the other members of the confederacy.”

It is not as though residents of the District are actually without representation, despite what the license plates say. In a way, people living in D.C. have 535 representatives from both houses of Congress who live and work there for a large part of the year.

The District also enjoys benefits from its unique status. For example, federal funds account for 20 percent of the District’s budget, and Uncle Sam contributes more toward D.C. public school students than any other state. (As of 2018, the District spent roughly double the national average per student.)

Putting aside any policy arguments for or against statehood, the movement would face a much larger obstacle: the Constitution. It would take an amendment to the Constitution to alter the District’s status as a federal city.

While residents have been able to vote in presidential elections since the ratification of the 23rd Amendment in 1964, the states may not be as quick to ratify an amendment that would reduce their relative voting power in Congress. And voting power is what many proponents of statehood are after—adding more seats in the House and Senate that are a guarantee for one party.

Perhaps that’s why in a previous attempt to give the District representation in Congress, the proposal also would have added another seat in Utah—laying bare the nakedly partisan motivation.

In 2016, President Donald Trump won the White House with 304 electoral votes—77 votes more than Hillary Clinton. But Trump lost the popular vote by roughly 3 million ballots, prompting many liberal activists—and several of Trump’s would-be 2020 rivals—to call for the Electoral College to be scrapped in favor of a national popular vote scheme to elect presidents.

Under the current system, each state is awarded a set of electors equal to the total number of congressmen and senators representing them in Congress.

When Americans go to the polls, they don’t cast a vote for the president directly; they are actually voting for a slate of electors pledged to vote for a particular candidate. In most states, whichever candidate secures the most votes is awarded all of that state’s electoral votes, and the first candidate to earn 270 votes wins.

The Electoral College can be a convoluted way to pick a president, but that’s by design. The Framers rightly feared the tendency of pure democracy to descend into mob rule and run roughshod over the rights of disfavored minorities, so they created a Constitution chock-full of anti-majoritarian safeguards. That includes an Electoral College that can—though seldom does—seat a president who loses the popular vote.

There is a method to that madness. The nation is a diverse place, and voters living in rural Indiana quite likely have a different set of issues and concerns than do voters living in downtown San Francisco. The Electoral College gives greater weight to the former group, encouraging campaigns to focus on assembling broad coalitions that span regions and interests.

The alternative—election by pure popular vote—flips the tables. If pure turnout is the end goal, candidates will inevitably focus their efforts on the biggest states—California, for example—and major urban centers like Chicago and New York City.

That might not immediately sound so different than the status quo, in which campaigns spend nearly all their time and money on a small handful of key swing states. But the list of swing states changes with time, and they are called “swing” states for a reason.

New York and California, meanwhile—to say nothing of most major urban centers—are solidly blue. It’s no wonder, then, that the left wants to give these voters more power to select the president.

Democrats enjoy substantial competitive advantages in these areas, but there is another plus for the far left: Without the need to appeal to voters in “flyover country” to win national elections, candidates could run ever more leftward to satisfy the demands of coastal elites.

A few weeks ago, a majority of House Democrats voted to lower the federal voting age to 16 as part of an amendment to H.R. 1. The motion, thankfully, failed by a wide margin and enjoys scant popular support.

But the idea of enfranchising children still won the backing of many leading Democrats, including House Speaker Nancy Pelosi, D-Calif., who said it was important to “capture kids” early.

To hear Pelosi and others describe it, empowering 16-year-olds to vote is all about encouraging good habits of civic engagement, recognizing the intelligence of our youth, and giving them a voice. These kids are old enough to drive and work—shouldn’t they also be able to vote?

That all sounds high-minded and empowering, but something far more cynical and manipulative is going on. Liberals know that young people tend to vote Democratic. It’s with age and, dare we say, wisdom that people tend to turn to the right.

From the March for Our Lives to this month’s mass walkout to demand passage of the Green New Deal and other climate change measures, our children—at least, the loudest of them—clearly are not shy about their liberal inclinations.

Indeed, half of young Americans favor socialism, probably because schools have utterly failed to teach them about the costs of collectivist ideologies. And when socialism is all about a free lunch, free health care, and free college tuition, it doesn’t sound so bad.

Anyone—at least, anyone who doesn’t pine for a perpetual Democratic majority in Congress—should be able to see why giving high school teenagers the keys to the kingdom is not a bright idea. As a general rule, teens are impressionable, impulsive, and ill-informed about the real world.

That’s not meant as derision. It’s just biology: Teenagers’ brains are still developing and their hormones are surging. Many are bright and civic-minded, to be sure, and we’ve all met those rare teenagers possessed with maturity beyond their years. But they are the exception, not the rule.

On the whole, 16-year-olds know too little about the world—and often, virtually nothing about American history, government, or economics—to cast thoughtful and meaningful votes. If liberals truly care about raising the next generation to be engaged and informed, they should start by demanding civics education, not ballots, for America’s youth.

Standing alone, each of these four major proposals is a bad idea. Taken together, they have the potential to drastically alter the fabric of our society and government in ways incompatible with our Founders’ vision for our country.

The left is increasingly willing to cast aside any rule, any constitutional provision, and any political norm if it thinks doing so will lead to short-term partisan gains. That is a dangerous and short-sighted game to play.