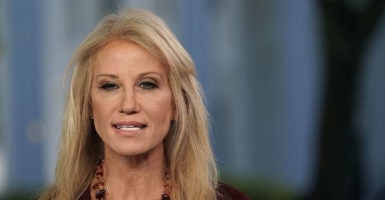 “When you’re talking about collusion and talking to Russia, and conspiracies and obstruction of justice for two years with no proof other than people leaking to you or you just, you just guffawing with the anchor next to you and fake lawyers on TV and the journalists who are pretending to be lawyers for that moment. You’re calling us all … You’re saying that we did not win fairly and squarely,” Conway said on “Fox & Friends” Monday.

“You in fact running around jutting your jaw out and saying, ‘I’m worried about the effect of institutions.’ You were disparaging the institutions. You were demeaning and deriding our great democracy—the presidency of the United States. Adam Schiff should resign,” she continued.

Attorney General William Barr delivered his report on the Mueller probe to Congress Sunday, and wrote that Trump and his campaign team did not collude with any Russian entities during the election. Barr also said there was no evidence to suggest Trump obstructed justice.

Conway said the media has gotten away with being overly biased and has yet to pay for their mistakes with Russia and Supreme Court Justice Brett Kavanaugh.

“There is not a single person in the media who got the 2016 elections so chronically and embarrassingly wrong [and] lost their jobs. And they probably won’t here, too. Look what they did to Brett Kavanaugh. The second most popular story in the Trump presidency was the Russian collusion fake hoax nonsense. The most covered stories I read last night in a condensed period of time was Brett Kavanaugh,” she said earlier in the interview.

And they treated him the same way. That is microcosmic version of what they tried to do to President Trump and his campaign and his family for the last two years. It’s a drive-by. They abandoned all standards, all personal ethics, all professional duty. Do you realize major papers in this country won Pulitzer prizes over their reporting over something that is totally fake? Over 13,000 stories combined by two major print outlets and two major cable stations not named Fox News. And as somebody who engages with those people [as] much as I can, and tries to get out there, we were basically were being told we were liars.