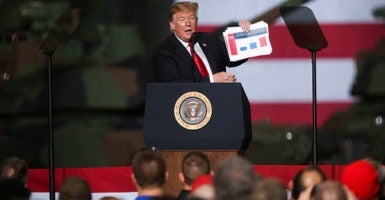 The annual Economic Report of the President highlights the successes of tax reform and deregulation, while warning of the dangers of socialist proposals.

The report, compiled by the White House Council of Economic Advisers and released Tuesday, also notes wages are rising, unemployment is at a nearly five-decade low, while focusing on what can historically unravel the growth.

The jobless rate stands now at 3.7 percent, while disposable income is up more than $2,200 from 2017 per average household, according to the report.

As of January, more than 70 percent of workers entering employment were previously out of the labor force. The labor force participation rate reached 63.2 percent, its highest since 2013.

Trump discussed the report during a speech Wednesday in Lima, Ohio, where he accused the media of trying to downplay the economic gains by tinkering with the figures.

“What they did is, they took odd months. I said, ‘No, no, no.  You go from January to December. You don’t take certain months and add them up.’ Because I said, ‘We’re going to break 3.’ And we did. We did 3.1. The ‘fake news’ tried to change it, but we caught them,” the president said.

The report notes that wages not only grew 3.4 percent in the past 12 months, the fastest rate since before 2009, but the increases are benefiting low-income earners the most. The bottom 10 percent of wage earners experienced the highest growth on record, while 5 million moved off food stamps.

“Income inequality is decreasing,” Adam Michel, senior fiscal policy analyst for The Heritage Foundation, told The Daily Signal. “Incomes for earners at the lower end of the scale are growing at a faster rate than those at the top. That’s the opposite of what happened under the Obama administration.”

The report credits tax cuts for capital expenditures rising by $300 billion from 2017. Also, business productivity grew at an annual rate of 1.9 percent, nearly twice the rate of the expansion before the tax cuts, according to the report.

Democrats opposed to the tax cuts claimed that stock buybacks were evidence the tax cuts weren’t working and only benefited the wealthy.

The increased investment and productivity demonstrates that’s not the case, said Michel.

The economic report lays out the case against socialism, which some members of Congress and at least one Democratic presidential candidate have endorsed.

The report cites as examples the Soviet Union, China, and Cuba as failed experiments, showing that nationalizing industries cuts productivity by about 50 percent.

“Detailed policy proposals from self-declared ‘socialists’ are gaining support in Congress and are receiving significant public attention,” the report says, conceding that “[p]resent-day socialists do not want the dictatorship or state brutality that often coincided with the most extreme cases of socialism.

“However, peaceful democratic implementation of socialist policies does not eliminate the fundamental incentive and information problems created by high tax rates, large state organizations, and the centralized control of resources,” it added.

“Venezuela is a modern industrialized country that elected Hugo Chavez as its leader to implement socialist policies, and the result was less output in oil and other industries that were nationalized,” the report adds. “In other words, the lessons from socialized agriculture carry over to government takeovers of oil, health insurance, and other modern industries: They produce less, rather than more, even in today’s information age, where central planning is possibly easier.”