Trump Administration Is Reverting to ‘Catch and Release.’ Congress Is to Blame. 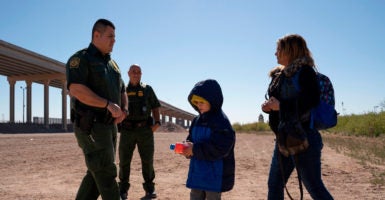 A mother and her son turn themselves into Border Patrol agents to claim asylum after crossing the Rio Grande in El Paso, Texas, on March 19, 2019. (Photo: Paul Ratje/Getty Images)

Reports have surfaced, citing government officials, that border officials no longer will refer detained migrant families to Immigration and Customs Enforcement. Instead, due to constrained resources, they will “begin releasing hundreds of families caught each day in the Rio Grande Valley in Texas.”

As a result, tens of thousands will join the ranks of millions of illegal immigrants already in the United States.

This practice contradicts the Trump administration’s promise to end “catch and release” and to detain illegal immigrants until they are deported. Technically this does not repudiate current policy, but it offers more proof that there is in fact a real crisis at the border.

Detention before removal is by far the most effective means to ensure that illegal immigrants comply with lawful deportation. At present, the Immigration Reform Law Institute estimates there are about 1.7 million individuals in the U.S. who are unlawfully present and have been ordered to leave the country.

Not surprisingly, none of them were in detention when they were ordered to leave. A common tactic to avoid deportation is just not showing up to deported.

That problem is growing as migrants have adopted new tactics at the border to evade the enforcement of immigration laws. Recent migrant caravans of organized groups have popularized this as they seek to exploit loopholes in U.S. law.

Under U.S. law, the Department of Homeland Security has the authority to enforce expedited removal. If illegal border crossers are apprehended within 100 miles of the border and 14 days of entry, immigration officers can quickly deport them. This practice accounts for almost half of all deportations from the U.S.

But there is a catch. If groups are apprehended crossing the border that claim to be family and have children, and submit an asylum claim, they cannot be put into expedited removal. Knowing this to be true, such groups have sought asylum, leading to a dramatic spike in asylum claims.

These groups know that up to 90 percent of asylum claims are rejected, but merely filing an asylum claim can get them into the country to await a hearing. Then, when their claim is rejected, they often fail to show up and are never deported.

These groups are clearly taking advantage of this loophole. Homeland Security has even noted cases where human smugglers have assembled fake “families” and brought them across the border, then recycled the children, smuggling them back into Mexico to form new “families” to smuggle back into the U.S.

The number of bogus family asylum claims at the border is becoming overwhelming for border officials, leaving the Department of Homeland Security with little legal option other than to release them into the U.S. The fact is that more and more, smugglers see this tactic as successful and are increasing the practice.

There are only three ways at present to help stop this insanity. One is adding more border security (like walls) to limit the number of illegal crossings to begin with. The second is to create sufficient detention space to hold apprehended groups until their asylum claims can be resolved. The third is to close the legal loopholes that allow migrants to take advantage of asylum.

Here’s the problem, though: All of these solutions require the cooperation of Congress, and the president’s political opposition in Congress is adamant about opposing the president on all of these. In fact, part of its opposition is to deny the crisis at the border even exists.

If the goal is open borders, then arguably there is not a crisis at the border. But if the objective is to end the flood of migrants at the border, which is both a security and humanitarian crisis, then Americans are going to have to insist Washington take action.

There are sensible, responsible, and fair solutions that would equitably address border security and all the other challenges facing our increasingly broken immigration system. Those solutions won’t arrive until Americans start to demand serious answers to these seemingly intractable problems.