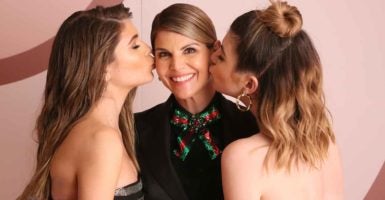 I have told the following to numerous audiences:

I’m hardly a Hollywood celebrity, but almost no day goes by that I am not stopped by a few strangers who want to shake my hand and say something. Needless to say, I rarely know the religious identity of the individual, but if the person tells me what college their child goes to, I assume the individual is a Jew.

When I relate this to Jewish audiences, it invariably evokes a great deal of laughter. Jewish audiences know how true, albeit slightly exaggerated, it is. As I always add, to more laughter, non-Jews don’t tend to tell strangers what college their child attends (which is why non-Jewish audiences don’t find the story nearly as funny).

The story is humorous, but it conveys a serious and troubling fact: Many American Jews define their worth by the college their child attends. In American Jewish life, there are no bragging rights equal to being able to say one’s child attends a prestigious college.

Thanks to the recent revelations about wealthy people—few of whom are Jews—paying large sums of money to bribe coaches and others to get their children into elite schools, it is now clear this perverse affliction is not limited to any ethnic or religious group.

Why would people do what they know to be immoral and illegal just to get their child into Yale—or, for that matter, the University of Southern California?

I am certain the biggest reason is bragging rights.

Apparently, many American parents define much of their worth as parents—and even as individuals—by what college their child attends.

If I am right, it betrays an extraordinary level of superficiality. That your child got into Yale tells us nothing about you either as a person or as a parent. In fact, it doesn’t tell us anything more about your child other than that he or she studied enough to get great grades and is adept at rowing or playing the oboe or some other extracurricular skill.

Indeed, videos of Yale students screaming “f— you” at a distinguished (and liberal) Yale professor over an email his wife sent defending “offensive” Halloween costumes—students who were then supported by hundreds of other Yale students (an episode even The Atlantic found repulsive)—leads one to assume that getting into Yale means nothing other than high grades or perhaps membership in the right minority.

And it tells us a great deal about the low moral and intellectual state of Yale University—which went on to honor one of the students who screamed epithets at the professor.

In a blind test of character, if I had to hire either a hundred students attending the University of Wyoming or a hundred students attending Yale (or any other prestigious university), I would choose the Wyoming students in a heartbeat. And if I had to choose a spouse for one of my children from among Wyoming or Yale students, I would likewise choose the former.

There are, of course, fine young men and women at Yale, but their being fine has nothing to do with why they were admitted to Yale and is not fostered by Yale.

There is a second reason parents will do almost anything to have their child attend a prestigious college: money. They believe attending a prestigious school guarantees a far greater future income, and for those who equate a large income with meaning in life—or with happiness—this is determinative.

For those who have a different value system and those who link happiness with a happy family life, close friends, and a religious community (a particularly great contributor to happiness), that alleged extra money isn’t nearly as important.

Moreover, this widespread belief isn’t even true. As New York Times columnist Frank Bruni points out in his book “Where You Go Is Not Who You’ll Be,” among American-born chief executives of the top 100 companies in the Fortune 500, only about 30 went to an Ivy League school or equally selective college.

And to the extent the belief that graduates of prestigious colleges will make more money is true, it is largely because young people who get into those colleges are driven to amass money, prestige, and/or power.

As Yale professor of computer science David Gelernter writes, “They go to Yale to become prominent, powerful, successful, and naturally (why not?) rich and famous.”

Such individuals will earn more than those who are less driven. But virtually any ambitious and capable individual in America will earn good money and if he or she leads a responsible life and saves money wisely, will retire with well more than a million dollars.

Tell your children from the day they understand language that you care far more about their character than about their grades or what college (if any) they go to. Only then will you have a child you can brag about.

But if this college admissions scandal is any indication, I wonder whether most American parents could actually say that to their children.