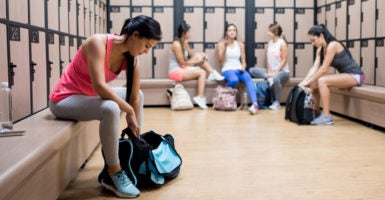 There are at least 787 students at Pennsylvania’s Honesdale High School—but only one of them seemed to know about a major change in the school’s rules.

The others found out the most traumatic way possible—when they walked into the girls’ locker room and found a teenage boy in women’s underwear.

For at least one 15-year-old sophomore, the situation was terrifying.

“It was first period,” she remembers, “and I had gym class. And I walked in [to change] with all my friends, and while I was putting on my pants, I heard a man’s voice. So I turned around, and he’s standing there on the opposite aisle looking at me. I glanced down, and I could tell that he was wearing women’s underwear and what was underneath it.”

When the boy stared back her—and the entire group of partially dressed girls—she was horrified.

When she got home that afternoon, she told her mom and dad what happened.

Turns out, the students weren’t the only ones who’d never been notified about the policy. Still in shock, they called the principal and Wayne County superintendent.

Neither was particularly sorry about the girls’ experience. And to prove it, they refused to lift a finger to help. The girls’ only option was to wait outside the locker room—a place designated for them—until the boy inside was finished.

That’s completely unfair, lawyer Andrea Shaw argues. Essentially, the school is punishing the girls for wanting to use their own space.

“The school’s only solution for my client was for her to wait outside the locker room until the individual of the opposite sex was finished changing. And then she went in and was late for gym class and also late for her second-period class,” Shaw said.

“[Their] solution made it clear that they believed that my client was the problem.”

Just to the south, in Boyertown, Alexis Lightcap ran into the same situation.

“No one prepared us, warned us, or counseled us” about the boys they’d find in their restrooms and locker rooms. And they were just as unsympathetic when the girls complained about it.

Like this sophomore, Alexis thought the adults’ job was to protect students. Instead, she got the same cold shoulder from administrators, who seem to be more concerned about looking politically incorrect than guarding their girls’ privacy.

Because of that, these girls are being put in an impossible position, Shaw argues in her formal complaint to the U.S. Department of Education.

“Given the culture’s treatment of LGBT issues, [she] has to choose between her privacy and ostracism.” Now that Wayne County is taking the boy’s side, girls are “unbearably uncomfortable”—and not just her client.

Other students have come forward from the cross-country team and said they object to changing in front of him. Parents are worried about “overnight trips and whether the male will be assigned the same hotel room.”

Girls aren’t using the restroom during school because they’re worried they’ll run into male classmates. And others are concerned that “the teachers will retaliate” if they bring up how uneasy they are.

It’s ironic, then, Shaw writes, that the district is so particular about its dress code.

“Female students cannot wear skin-tight clothing, yoga pants, spandex, tights, form-fitting blouses, or short tops that expose a bare midriff, short dresses or skirts, shorts … . Yet the school does not find it objectionable to permit a female-attracted male student to view girls while they are undressed or for the girls to see the male student’s genitals outlined in [girls] underwear.”

Unfortunately, congressional Democrats don’t see it that way. They want to open up everyone’s locker rooms, showers, and bathrooms to men under the so-called Equality Act.

This girl’s dad can’t believe that. “I think any father wouldn’t want their child to be exposed to anything, especially at such a young age.”

Well, the bill has 239 co-sponsors. I wonder how they’d feel if one of their daughters came home crying because they were forced to undress in front of a teenage boy?

“This is not a partisan issue,” Kristen Waggoner of the Alliance Defending Freedom insists in a great op-ed for The Hill.

“Feminist lesbians who disagree with me about almost everything agree with me on this point, but have been shouted down within their communities because they insist that women’s private spaces are for women,” Waggoner said.

“We all can agree that individuals with gender dysphoria deserve compassion and dignity, but no amount of self-perception can make a man a woman—nor change the reality of what being a woman is,” she added.